Best Snow In Tahoe - Now And Historically
BY Kayla Anderson

In Lake Tahoe every winter is different. Wildly different, often. There are the crazy snowy seasons that begin in October and end in July, but also brutal drought years that made us wonder if deep snow and face shots were a thing of the past. But things usually revert to an average weather pattern, or better, such as the 2018-19 winter when it snowed literally a foot a day from February to April. Many Tahoe resorts showed snow totals that were the most they had in 10 years.

In Tahoe, the geography and environment are such to where the weather changes as it navigates around Big Blue. The storms usually tend to build up in the Pacific Ocean and move on through, eventually dumping a bunch of snow on Donner Pass and then dropping more on the West Shore's banana belt, but then may completely peter out as the storm makes its way over to the northeast shore. Every system is different.

However, we can collect data and use it to analyze what has happened in the past to try to predict the future. Taking into consideration factors such as location, base and peak elevations, the amount of snow Tahoe resorts have received throughout past ski seasons can help us determine who has the best snow in Tahoe now and how they performed historically.

Below we show up-to-the minute graphs with the Sierra Nevada resorts that received the most snow in the last 10 days and the ones that are predicted to get the most in the next 10 days—that's some pretty sweet data—so you can get a sense of where the most powder is in Lake Tahoe.

Note: During summer months, these graphs won't have data in them as there is no forecasted or recent snow.
Largest Snow Totals In Tahoe Last 10 Days (inches)
Tahoe Ski Resorts' Snowfall Potentials, Next 10 Days (inches)
ZRANKINGS MODEL

While there is only a dozen or so ski resorts in the Lake Tahoe region of the Sierra Nevada, each one has a distinct personality with varied snow conditions. In coming up with this comprehensive study, we also factor in geographical positioning, elevation, vertical slope, and past snowfall data that goes back decades.

The scores below determine who has the best snow in Tahoe based on a resort's average snow quantity, which direction its slopes are facing (as north-facing slopes tend to preserve snow the best), and the standard deviation of precipitation throughout the season (calculated December-March). Out of all the ski resorts in North America, here is our composite score- and the most comprehensive snowfall ranking- of resorts in the Tahoe region. We hope this guide helps you plan your winter Tahoe trip:

Perched on the outskirts of South Lake Tahoe above the Mokelumne Wilderness area, this Vail-owned ski resort is known as a big mountain resort with snow-covered cliffs, natural features, and incredible powder days. With its majority of north-facing slopes at a bit higher elevation than a few of its other Tahoe counterparts, navigating parts of Kirkwood's backcountry sometimes requires a beacon, avalanche shovel, and a probe. What's nice about this resort is that it also has lodging, so if you really want some powder then you can check the weather forecasts and drive up before a storm so that you can get snowed in and have a better chance of getting first tracks.

Just be sure to put ribbons on your skis when out playing in Kirkwood's deep powder; my brother once launched off a cliff and quick-released out of his mostly white Volkls and it took us an hour to find one of them again in the powder.

Situated along the I-80 corridor, the storms seem to pass through here with gusto and in turn dumping a lot of snow. As one of Tahoe's oldest ski resorts—founded in 1939—Sugar Bowl has 55 percent north-facing terrain and its bountiful acreage offers plenty of powder to go around. In the 2018-19 season, Mother Nature dumped 453 inches of the fluffy white stuff. Historically, it receives more than 90 inches of snow in 39.5 percent of its winter months. Sugar Bowl is also just before Donner Pass, named after the infamous Donner Party, that met their demise and further cementing how intense these freak winter snowstorms can be. 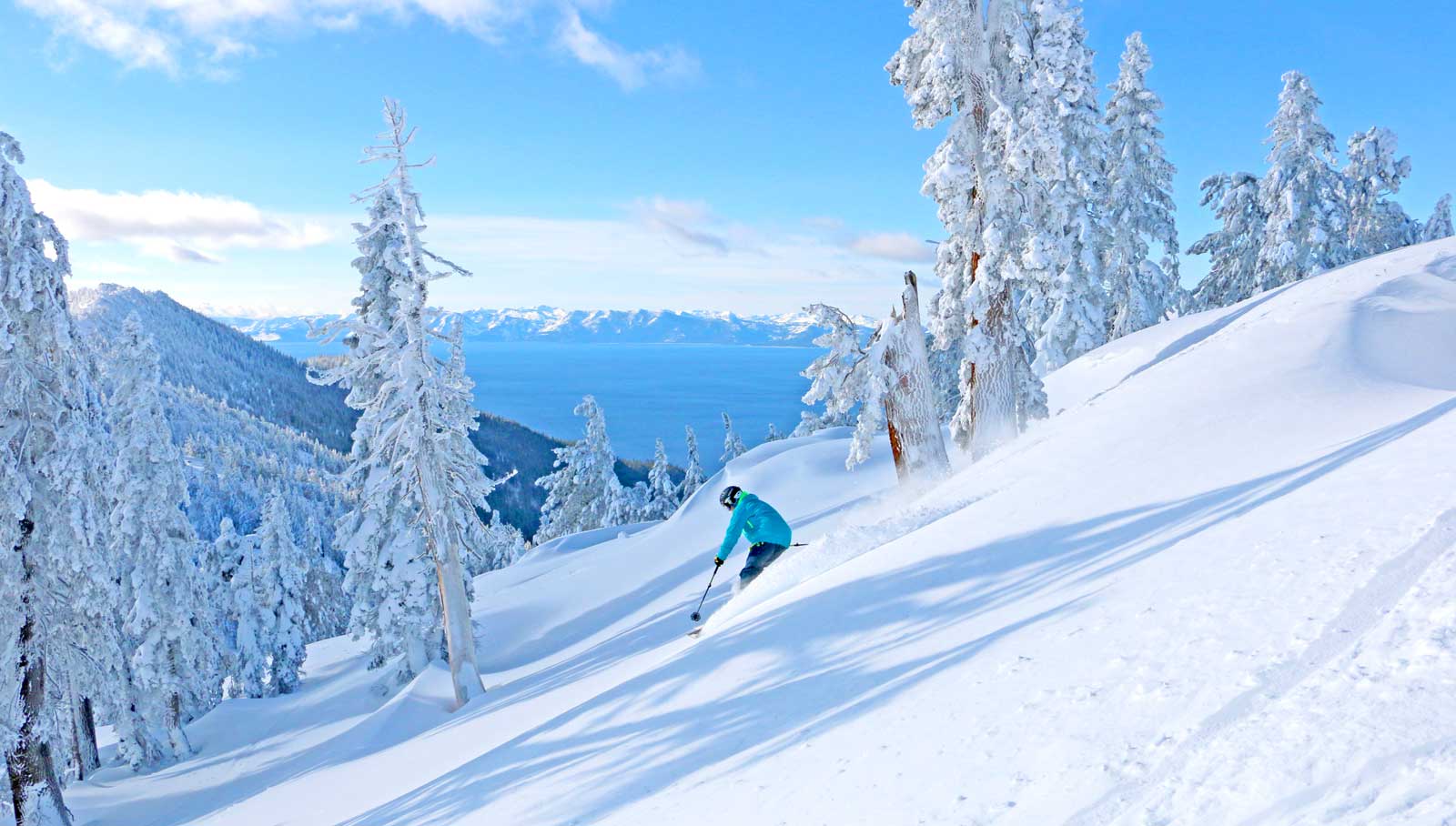 Powder and views like this only come together in one place: Lake Tahoe. Courtesy: Diamond Peak Resort

Located 15 minutes northeast of Incline Village and 30 minutes west of Reno on NV-431 (also called the Mt. Rose Highway), this ski resort touts that it has Tahoe's highest base elevation of 8260 feet. This means that it tends to dump more snow here and only get better as you climb to the top, unlike some other resorts that are closer to Lake Tahoe and don't get the temperatures they need to turn wet precipitation into the solid stuff.

This 1,200-acre mountain also has plenty of terrain for all ability types and you can see all of Reno and Washoe Valley from the top (and Lake Tahoe from the backside). Mt. Rose is also one of the first ski resorts to open and the last to close- in the past few years it has had at least a couple of runs open by Halloween thanks to temperatures low enough to make snow before it actually falls. In decent snow seasons, Mt. Rose usually closes sometime in early May.

About 12 miles west of South Lake Tahoe on Highway 50, Sierra-at-Tahoe is considered somewhat of a locals' gem that attracts freestyle skiers and riders due to its fun intermediate ski runs and various terrain features; more advanced skiers like to drop into the gate-accessed steeps of Huckleberry Canyon. Since half of its terrain is north facing, it tends to hold its powder for a longer period even on those bluebird days. Its wind-protected chairlifts make slashing through fluffy snow more enjoyable, too.

A few miles past Sugar Bowl on Interstate 80, Boreal also appeals to a freestyle-type crowd who enjoys hitting halfpipes and terrain park features. Depending on which side you're coming from in Reno, it also takes about the same amount of time to get to Boreal as it does to Mt. Rose. What Boreal has going for it is that most of its terrain (85 percent of it) is pointed due north, allowing it to make and retain most of its snow as needed. Like Mt. Rose, this 380-acre resort is also one of the first to open and last to close. And while it appeals more to beginners and an alternative sports crowd (largely due to the indoor Woodward Tahoe training facility on its premises) its biggest attribute is its accessibility no matter where you are coming from in Northern California/Nevada.

Located right above the Heavenly Village in the heart of South Lake Tahoe, this expansive ski resort is hard to miss when recreating on Big Blue's southern shores. There are three main access points to get on Heavenly's slopes—one off Ski Run Boulevard on the California side, Boulder Lodge on the Nevada side, and the gondola right in the middle in the Heavenly Village next to many South Lake's casinos. Heavenly has Tahoe's highest peak elevation of 10,040 feet and more than half of its slopes facing towards Lake Tahoe's North Shore, offering terrain for everyone in various types- whether it's easy and wide groomed runs for intermediate skiers to deep snow found in Killebrew Canyon accessible from the top of the mountain.

Soda Springs is Boreal's smaller counterpart, located a few miles away from it on I-80; the same turnoff you take to get to Sugar Bowl. Although it's a small resort with moderate slopes catering to beginners, Soda Springs is tucked into the trees near Donner Pass and tends to keep light, fluffy snow for longer due to its 75 percent northern-facing terrain. In good snow years, Soda Springs can get up to 90 inches of snow during one-third of its season but in bad snow years unfortunately little, if any, ski runs will be open by Christmas.

Located in Tahoe's northwest region on CA-89 between Truckee and Tahoe City, Alpine Meadows is another expansive ski resort tucked into the trees yet has a decent vertical drop that makes it prone to avalanches after a big storm. While not as big as its sister resort Squaw Valley, we do think that it gets the better snow since its totals seem to stack up more frequently at its mid-mountain level. Powder hounds tend to head over to Alpine after a big winter storm because it tends to be less crowded than Squaw. However, since there's only one way in and one way out it's best to get there between 6am-7am on a powder day after they clear the road to avoid sitting in traffic.

This legend of North Lake Tahoe averages 370" of snow per year, keeping its steep upper slopes well clad in white most winters. The lower base area of the resort—6,200 feet—means that mid mountain and the lower mountain can cook, however, when it's warm, so plan for corn skiing (which can be piles of fun), when the Tahoe temperature creeps up, which it tends to do. Skiers at Squaw will see an average of 15% of their days bring more than 6" of snow, while 30% of winter months bring more than 90" inches of snow and 33% bring less than 30 inches. 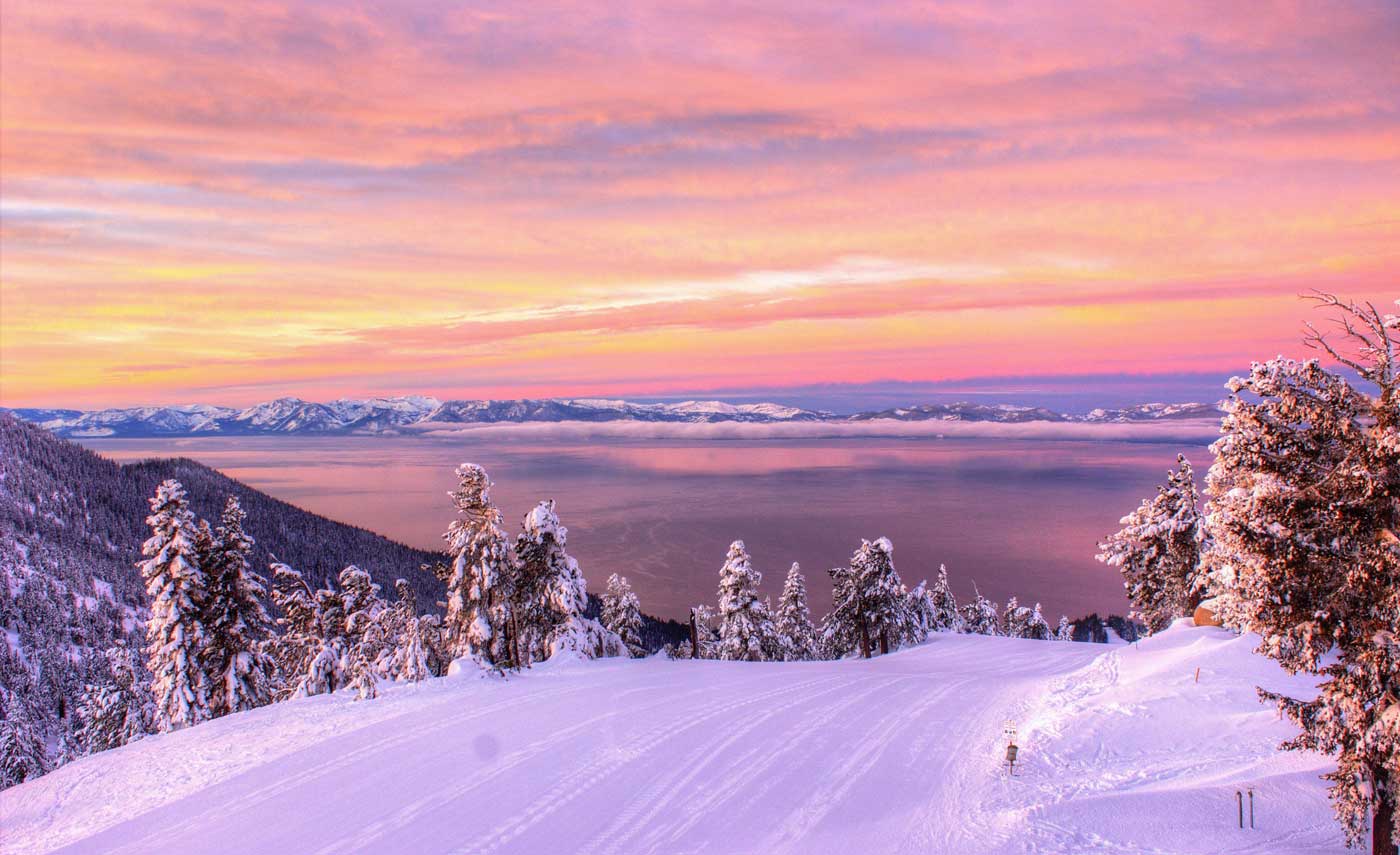 Tahoe Views are the stuff of legend

This family friendly resort has lots of pure fall lines in that sweet spot of 30 to 35 degrees. Those slopes average 315" of snow per winter, a solid number given Northstar's 6,300-foot base. The trees at Northstar can be a sneaky spot to find long powered stashes with few tracks. While everybody is trying to pillage Alpine and Squaw, some canny riders lap up ride after ride of powder just down the road at Northstar. Half of Northstar's slopes face north, protecting snow and keeping it nice and frosty. Northstar sees 12.8% of its days bring more than six inches of snow, while 25.9% of winter months bring in more than 90 inches and 35.8% of months bring less than 30 inches.

Diamond Peak, like many resorts that fly below the radar of the big destination mountains, can be a sneaky play on a powder day. The ski resort averages 300" of snow per winter. Skiers can expect about 13% of days to bring six inches of snow or more, with 25% of months brining 90 inches of snow or more. Thirty percent of winter months see less than 30 inches of snow. A full 40% of the resort faces north, so stick to those slopes when the warm Tahoe sun comes out on a bluebird powder day morning. 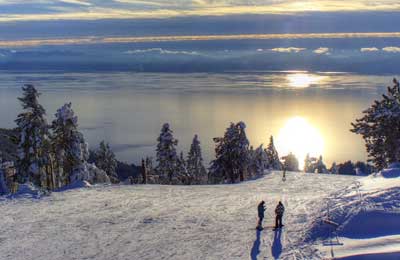 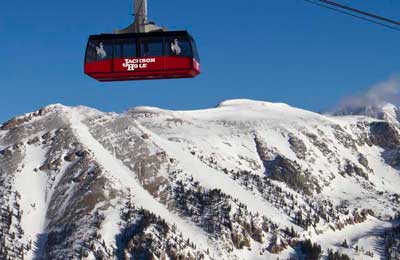 Confessions Of A Mediocre Skier: Why I Ski