The graph immediately below shows Utah ski resorts that have received the most snow duing the last 10 days. This is updated daily, but during summer months, these top graphs won't have data as there is no forecasted or recent snow.

Below that, the next graph shows the highest potential snowfall amounts across Utah for the next five days. Knowing these things—where it has snowed the most recently and where it's likely to snow the most in the near future—tells skiers where the conditions are best right now and where they'll continue to be great.

For those planning out farther ahead, we've put together data and explanations around the ski resorts in Utah that have the best snow historically and how these resorts perform at different times of the year. This is vital data for those planning ski trips months in advance (as most of us do). This information is below the two graphs.

Utah's reputation for great snow has been carefully cultivated. The state government has stamped Utah license plates with the words "Greatest Snow On Earth" for decades.

Utah deserves the reputation. Parts of the Wasatch Range receive more snow and with a lower standard deviation (more dependable) than anywhere else on the North American continent.

But not all of Utah is the same. Some ski resorts—Alta, Snowbird, Brighton and Solitude—outpace everywhere else. Some, such as Deer Valley and Park City, are simply average compared with other major ski resorts across the American West.

But snow conditions can vary by the week and day, of course, which is why up top we included the graphs that show the Utah ski resorts that have received the most snow recently and are likely to receive the most in the near future. Down here, we're diving into what Utah ski resorts have been best for snow historically, something that is hotly debated, but shouldn't be: we have the the data and the facts.

A thorough explanation: The best ski resorts for snow in Utah historically:

The resort synonymous with snow became that way for a reason—and it was largely due to organic word-of-mouth exchanges from one skier to another for decades. You don't see many Alta ads, if any, because this place doesn't need any. The snow always finds its way here, and the people do, too.

Alta is positioned at the best spot in what is perhaps the best canyon for snow in the world. Little Cottonwood Canyon turns weak weather systems coming across northern Utah into raging two-foot powder events, which is how the resort averages 517" of snow per year. This effect remains remarkably consistent throughout the years, which is why only 1.3% of winter months at Alta bring less than 30" of snow, while 49.3% of them bring more than 90". Spend five days at Alta and you're likely to hit it deep—20.2% of winter days bring six inches of snow or more.

As Alta's next-door neighbor, Snowbird enjoys all of the same effects. Alta receives slightly more snow, but not enough that any skier would notice it across a season. Snowbird's peak elevation, at the top of its tram, is 450 feet higher than Alta's which is good, but its base area is more than 700 feet below that of Alta's which means its lower slopes suffer first when snow begins to degrade. Just like Alta, Snowbird is greatly helped by the fact that most of its terrain—50%—faces north, which tends to keep it cold and chalky.

Utah's hold on the top places for snow in North America is a firm one, with Brighton rounding out the top three overall for the continent. It is one canyon north of Alta and Snowbird, in Big Cottonwood Canyon, whose ability to capture storms and wring them dry is similar to that of Little Cottonwood. This brings Brighton, which is positioned at the end of the canyon, similar to Alta, 504" of snow per year. The snow is consistent, with only 4.3% of winter months bringing less than 30", with 44% of months bringing more than 90". Skiers can hunt powder here dependably, as the 19% of the days at Brighton see six inches of snow or more. 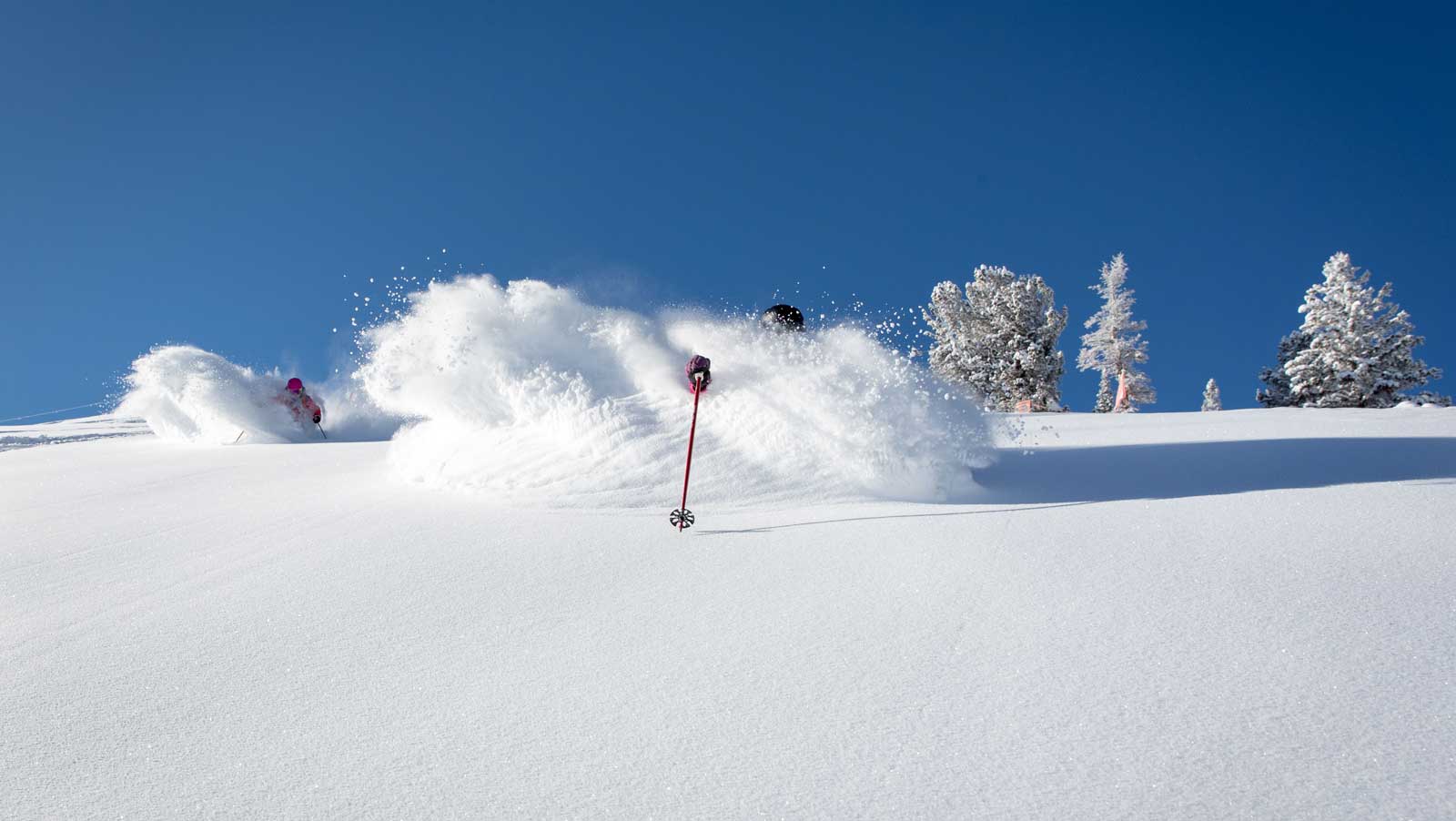 This happens a lot at Alta. Courtesy: Alta

Brighton's direct neighbor to the west, Solitude also gulps up snow from the Utah canyon effect. Its base is about 800 below that of Brighton's, and it's farther from the end of the canyon, which is why it receives less snow. It's sill one of the six best places in North America to troll for powder, however, as it averages 437" of snow per winter. Only 7.5% of Solitude's winter months bring less than 30" of snow, while 34% of them bring more than 90", and 17% of days feature six inches of snow or more.

Park City as a whole is about an average performer when compared with other ski resorts across the Rockies. It receives 290" of snow per year, with 9.6% of its months bringing 90" or more. It's just over the ridge from Brighton and Big Cottonwood Canyon, but that makes all the difference. That said, there is a lot of variability in the snowfall amounts in local areas across the ski resort. The high ridges near the Jupiter and Niney-Nine-Ninety lifts can get 50% more snow during a lot of storms compared with mid mountain, which makes sense, given their adjacency to the other side of the Wasatch—the one that gets 500" of snow a winter. Canny veterans know where to go for bigger stashes at Park City. In general, stay high, and look for north-facing slopes.

Better known for its food than its snow, Deer Valley can be a sneaky play on a powder day. While others flock to the upper reaches of Park City and around to the other side of the Wasatch to Alta and Snowbird, the competition for fresh lines at Deer Valley tends to be less intense, and skier can lap good stuff for hours during the week. Overall the ski resort has a snow profile similar to that of Park City, which makes sense given that the two ski resorts border each other where Park City's McConkey's lift abuts the Empire Canyon terrain of Deer Valley. DV gets 275 inches of snow a year, and about one in ten months brings 90" or more. Skiers can expect powder days of six inches or more 12% of the time. 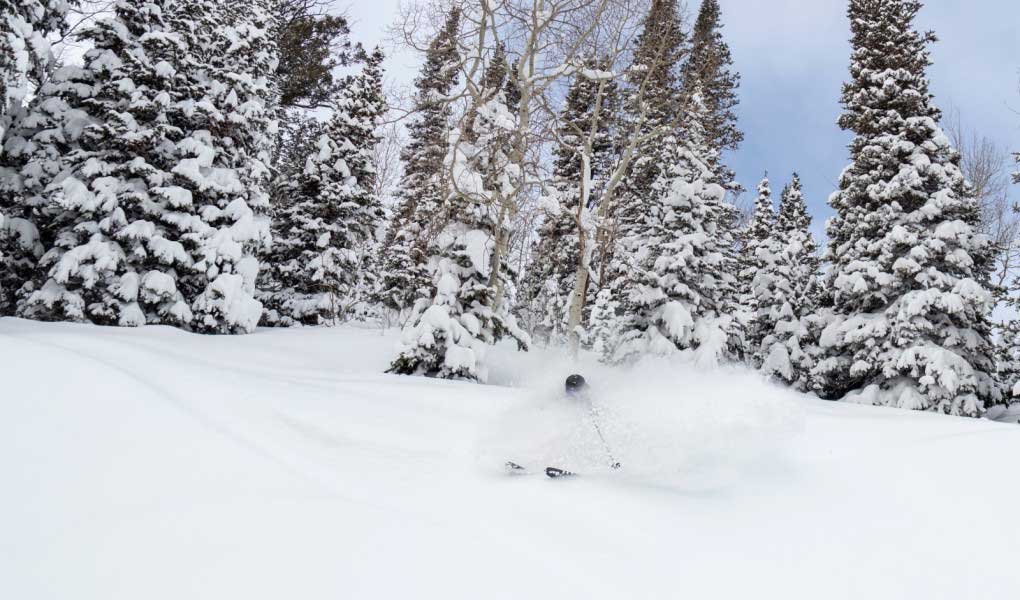 The host of the speed skiing events (downhill, super G) for the 2002 Winter Olympics has some great pitches of terrain that pick up their fair share of snow—about 316" per year. Snowbasin sits north of I-80 in Utah along with Powder Mountain, giving it a distinct snowfall profile. It is more prone to drought: 23% of winter months bring less than 30" of snow, but it can have big months as well with 11.8% of winter months seeing more than 90" of snow. Over the decades, 12.3% of days at Snowbasin bring six inches of snow or more.

Eagle Points sits way south in the state from Salt Lake City and the major Utah ski resorts. But it manages to attract a good deal of snow—325" per year—and its high base elevation of 9,000 feet help keep things well preserved. The ski area has a low propensity for drought, with only 13% of winter months bringing less than 30" of snow, while 18% of months bring more than 90". Skiers can expect 14% of days to bring more than six inches of snow at Eagle Point. 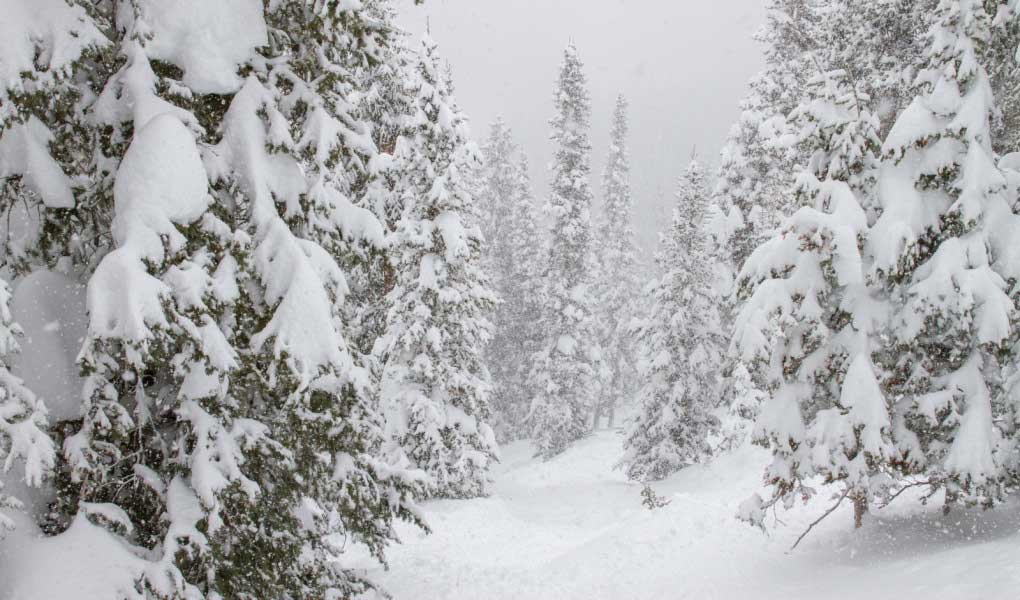 Another southern Utah resort, Brian Head benefits greatly from its high base elevation of 9,600 feet, making it one of the highest ski resorts on the continent. Brian Head receives 308" of snow on average, with 13.6% of months bringing more than 90" and 12.6% of days seeing six inches or more.

A regional resort in far northern Utah near the border with Idaho, Beaver Mountain brings in about 300" of snow per year. Its peak elevation is fairly low, at 8,800 feet, but its northerly latitude helps keep snow cold. The ski area sees about 20% of its winter months pass with less than 30" of snow, but 10% bring more than 90". This isn't a place most destination skiers will ever get to, but it's a fun stop on a drive from Jackson to Salt Lake, or for skiers staying in Ogden looking for an interesting day.

Christopher Steiner is a New York Times Bestselling Author of two books, and the founder of ZRankings. He's on Twitter here.