The Best Ski Resorts For Snow in February
BY Christopher Steiner

Ski trips in February offer special dividends to skiers who can make them happen.

February is probably the best overall month to ski, when weighing all factors. The risk of visiting a ski resort that is not fully open due to insufficient snow at this point is minimal, especially in the Rockies. And warm temperatures have not yet set in at many mountains, meaning that conditions will remain chalky and winter-like, rather than slushy and spring-like.

Best ski resorts for February ski trips, according to snow:


February is also advantageous to skiers because it's a time that, other than Presidents' Day weekend, is relatively sane and quiet at ski resorts when compared with the busier times of March and spring break and the holidays across December and January. So for skiers who can schedule trips during February, lodging is less tight and there's far more room to spread out on the slopes.

February powder doesn't ski off quite as fast.

But it is a time when the sun is becoming more and more of a factor for slopes that are not north-facing, which leads to faster snow degradation on days when there is little cloud cover. So this is the month when resorts with large shares of north-facing terrain, even if they don't receive as much snow, begin to enjoy larger advantages in snow conditions.

February isn't quite spring, nor is it the dead of winter. The ski resorts that provide the best ski conditions during this time are ones that:

To determine the best ski resorts to ski at a given time, we reference a resort's historical snowfall data, slope aspects, latitude, and elevation that, together, reveal when snow conditions peak at a given ski resort. Our methods are fully explained in a separate article..

Using this data, we have highlighted the ski resorts where snow is best, relative to all other North American resorts during February, and we have also selected resorts whose snow conditions tend to be at their best during this second month of the year. This means that the list contains resorts such as Alta and Snowbird, where snow conditions, on average, are almost always superior compared to other ski resorts, but we also include places such as Monarch Mountain and Big Sky, where February happens to be the resort's best month overall.

The Best Ski Resorts For February:

We've broken the ski resorts that made the cut into groups. This first group of ski resorts includes mountains who are strong throughout the winter, and whose historical snowfall patterns and geographical positioning—latitude, slope aspect and elevation—make them strong bets in February, and in any month. These ski resorts dominate the snow rankings for the entire winter, so they have to be mentioned, in any month.

The second group of resorts includes those major mountains whose conditions peak in February. So while a mountain such as Aspen Snowmass never cracks the top 10 overall for snow, it's worth noting that the best time to go to this consequential mountain, at least from a snow standpoint, is during the month of February.

Here is the first group, the always-on snow stalwarts that are a great bet in February:

Alta will always be at the top of any ski resort snow rankings. It gets more snow of better quality than anywhere, and sits at an advantageous latitude in northern Utah. More important than its geographic location, however, is the fact that 53% of the ski resort's terrain faces north, preserving all that snow like a deep freezer. 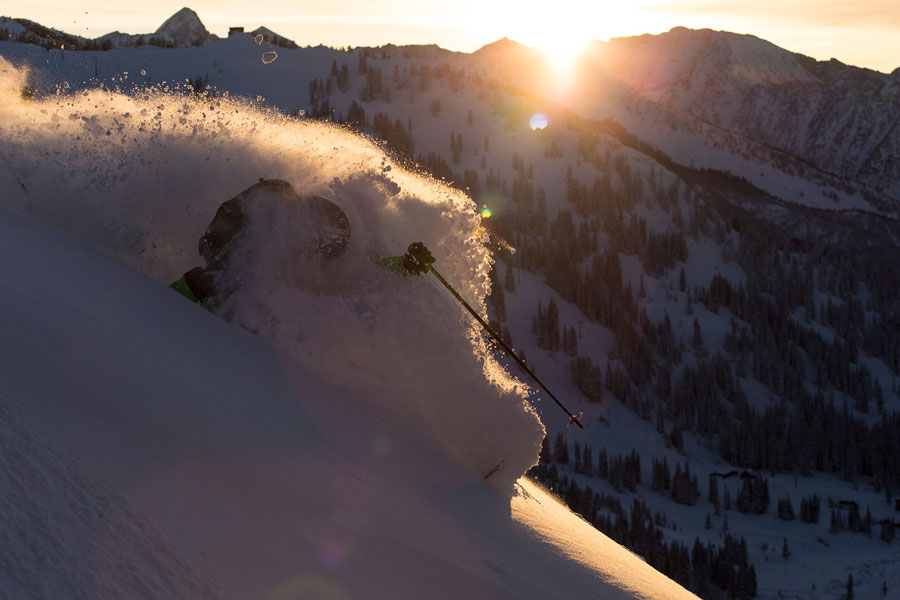 Snowbird, of course, sits just to Alta's west, and enjoys the same effects: copious snow, although less than Alta, which sits at the end of the canyon, and lots of north-facing terrain.

Brighton is an amazing hideout that, positioned at the end of Big Cottonwood Canyon, catches the brunt of big storms that sweep through northern Utah. Its powder stocks are only rivaled by a few ski resorts, most of them in Utah.

Solitude ranks just behind its neighbor here, but it has more steep terrain and a bevy of spots that don't see a lot of traffic. It's a great place to head when the powder seekers are racing to Alta and Snowbird.

Kirkwood prospers in February thanks to a rather high elevation for the Tahoe area—7,800' at the base—and a terrain layout in which 65% of the skiable acreage faces north. For snow, this is the best ski resort in the region. 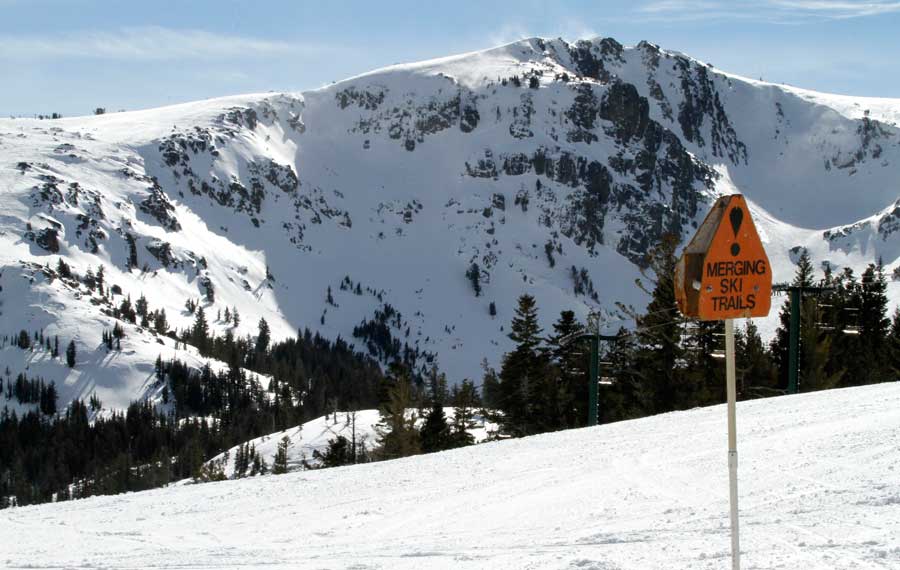 Kirkwood gets a lot of snow and tends to hold it. Courtesy: Kirkwood

With a true snow average of 349", a base elevation of 9,000 and 50% of its terrain facing north, Winter Park is one of the preeminent preservers of snow in the state of Colorado. First skiers who are lucky enough to ski there during the week, powder laps can be long, uncrowded and aplenty.

The above resorts rank well for snow during most seasons. Those we've listed below are resorts that are not among the very best for snow, but whose conditions are at their respective bests during the month of February, because of their latitudes, elevations, snow histories and slope aspects.

It is this second month of the year that is the best time to visit the ski resorts below.

Ski Resorts That Peak In February

These are the ski resorts whose best month happens to be in February:

Whistler would rank even higher here if not for its low base elevation of 2,140'. But the ski resort gets heaps of snow, with a true average of 415" per winter season, and 55% of its terrain faces north, which keeps things nice and sheltered as the sun intensifies during the second month of the year. February is the best month of the year, typically, to ski Whistler.

A-Basin gets an average amount of snow for Colorado, ranking behind places such as Winter Park and Vail for quantity of snow, but its A-Basin's other traits that send it soaring up the charts as the ski season grows later. The mountain has an very high base, at 10,780 feet, and 55% of its terrain faces north. So while other areas might be going to slush in the sun of the spring, A-Basin often stays chalky and fresh.

Loveland's snow benefits from one of the highest bases in North American skiing at 10,800'. The mountain also captures precipitation from large storm systems well, gathering in a true average of 346" inches of winter snow per season. Combined with its terrain that is 40% north facing, Loveland offers skiers a powder depot that rarely gets skied too hard.

The Beav can be absolutely killer in February, as its slopes, 55% of which face north, do a great job of preserving the 329" of snow the mountain receives during an average winter season. Crowds only get unruly in February during President's Day weekend, and even then The Beav is far more manageable than many other big time destination ski resorts in Colorado. Eat a cookie and get in the woods! 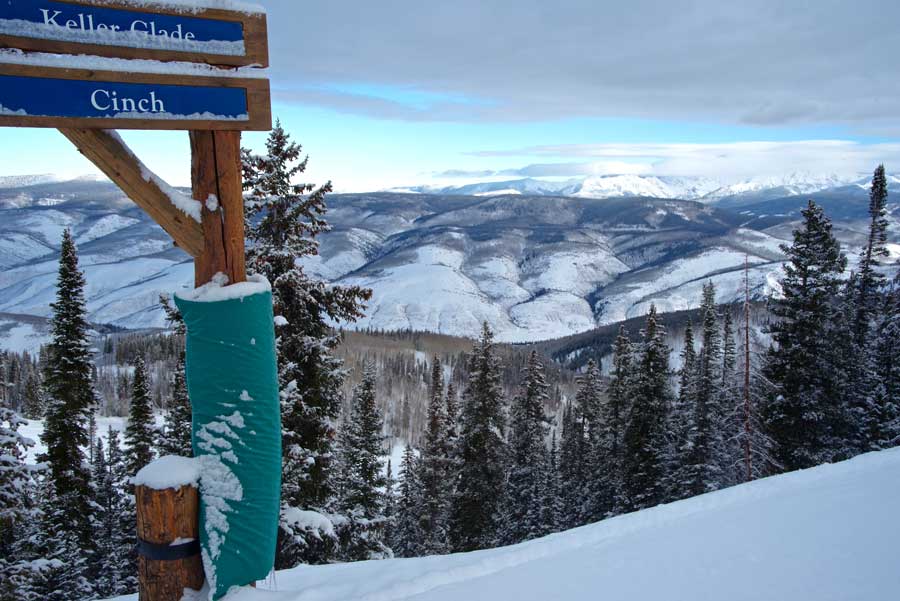 As the flagship ski resort of Colorado, most skiers are more than familiar with Vail. It's a default destination, for excellent reasons. One of those reasons is because Vail receives better than average snowfall for a resort in Colorado, with 359" during each winter season.

And the resort does well during February, with good amounts of north-facing terrain, 40%, and usually one of the bigger snow bases in the state at that point of the year.

On a whole, the Aspen area resorts score lower in snow rankings because they receive below average totals for Colorado, given their elevation. But Aspen offers skiers one of the best all-around ski trip experiences in North America, especially in February, when the slopes are almost always fully covered, and the high percentage of north-facing slopes keep the snow that is there in great shape.

Aspen is among the vanguard ski towns on the continent, along with Park City and Telluride, and is a must-hit for any skier searching for a new experience.

The skiing at Highlands is among our favorites, as the place sees far fewer people than other mainline destination resorts and its runs offer pure, wide fall lines. Highlands bowl is a must-hike for experts.

Much like Aspen, Copper doesn't rank highly for earlier months because of its below-average snowfall numbers for Colorado. Copper Mountain's secret weapon, however, is its high base—9,712'—and it's plethora of north-facing terrain, at 55%. This is a mountain that revels in the warming weather of February, and keeps its snow dusty and cold.

Mammoth possesses an exceedingly high base for a ski resort in the Sierra—7,953'—and a ridiculous amount of north-facing terrain at 65%. By February, those characteristics tend to overwhelm the fact that California and Mammoth have large snowfall standard deviations—things can be feast of famine here for long periods at a time. By the middle of February, things usually tend to even out, however, and Mammoth is one of the best mountains at preserving the snow it receives, which, on average, is a good amount at 350" per winter.

Monarch receives just below average snowfall for Colorado—with a true mean of 287" per winter. It doesn't have a giant wealth of north-facing terrain, but it does have on of the highest base elevations in skiing at 10,790 feet. This is a tucked-away resort that doesn't see a lot of destination skiers. That fact alone makes it a great bet for weekends—like February's President Day—that night be busy elsewhere.

Big Sky doesn't receive the kind of snow to make it a true alpha resort in regards to powder. But it does okay, with a true average of 282" per season. With the ski resort's northerly latitude, it tends to hold conditions fairly well in February. And even though 37% of the resort faces north, the place is huge, 5,809 acres, which makes that 37% an entire 2,200 acres on its own. So there's good stuff to be had in February at Big Sky. Just head to those shaded slopes. And crowds? Almost never.