Skiers can find unique rewards in January. The holiday crowds have left, the spring break hordes are two months off, and Presidents' Day is still weeks away. The dark middle of January, when temperatures are coldest, and crowds are at their smallest, offers a special opportunity for skiers who like skiing for skiing. It's during this period when snow can be at its best and powder days are often exercises in pure glee, the thought of big lines far away, somewhere else.

It can be harder to get away in the middle of January, as it's just after Christmas break, but skiers looking for a superior snow and crowd experience should make it a priority. The time of year should very much be a factor when it comes to deciding what ski resort to visit. We've explained this in length.

Skiers who may be used to skiing in the sun and warmth of March shouldn't be scared by January's shorter and darker days. This is the time of the year for which Gore-Tex-infused ski gear was made.

Below, we've spotlighted the best ski resorts for January. Some of them a usual suspects—because they're always good—Alta, Snowbird—but some other resorts excel in a special way in January. Typically, skiers can spot these resorts by examining their snow curves on their resort pages. For instance, it's easy to see that Steamboat's snow conditions typically peak in January:

You can check out any ski resort's snow quality curve according to date, of course, by visiting its page at ZRankings.com. Checkout our ski resorts snow rankings page for overall snow stats, including slope aspects—north, south, east, west—for every major, and many a minor, ski resort in North America.

Resorts with Best Snow for January:

Alta, Utah - January Snow Score: 100.00
That Alta would show up on the top of an examination of ski resort snow is of little surprise. Alta's snow comes in more copious amounts than anywhere else, it's of better quality than almost anywhere else, and much of the resort's terrain faces north—53% of it—which helps preserve this bounty of snow well into dry periods, not that there are many long periods without snow at Alta.

Alta and its neighbor Snowbird should be at the top of the list of any early ski trip, as their snow is more dependable than anywhere. 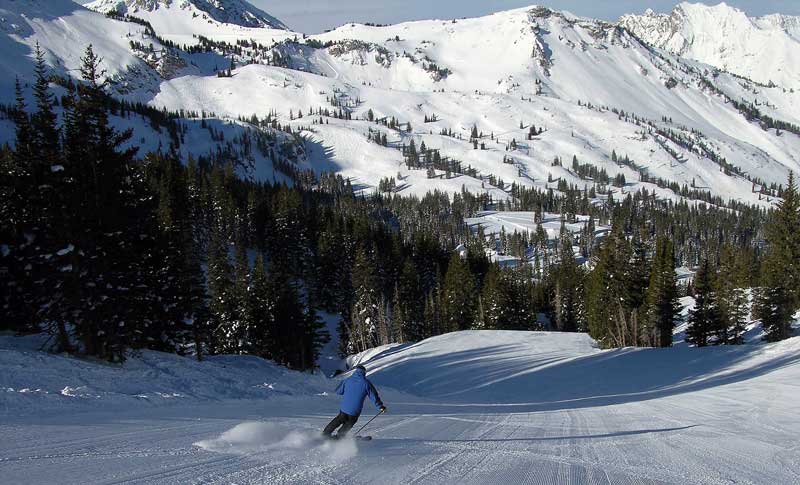 
Snowbird, Utah - January Snow Score: 93.2
As mentioned above, what holds for Alta holds for Snowbird. Skiers can get some longer runs at Snowbird, compared with Alta, as its vertical drop is more continuous across steeper pitches.

Snowbird also has the advantage for skiers who are skiing a January storm (something we heartily recommend). Snowbird skiers can ride the resort's tram up through the snowstorm, getting warm and staying dry, before again attacking the snow down across the resort's full vertical.

Also good bets in January, one canyon over from Alta and Snowbird, are Brighton and Solitude, which benefit from many of the same Utah effects.

Wolf Creek, Colorado - January Snow Score: 83.6
Wolf Creek receives more snow, a true 389 inches a year, than any other destination resort in Colorado. It is, however, a little harder to get to. But skiers who choose to fly to Durango in January—or make the drive down from Denver—will be rewarded more times than not during the first month of the year.

Because of its high altitude—a summit of nearly 12,000 feet—and its copious and dependable early snowfall, Wolf Creek is a great bet for early gambits into the Rockies, and one of the most sound plans for a January ski trip.

Jackson Hole, Wyoming - January Snow Score: 82.5
Jackson harvests large amounts of snow from all kinds of storms coming in from the northwest, a fact that helps the ski resort total 366 inches of snow at mid-mountain in a normal winter. That's an elite number. Jackson's snowfall also isn't as prone to disappear for lengths of time, like snowfall in the Pacific Northwest or California.

Much of Jackson's terrain faces south and east, however, which puts its snow square in the sun during the later months of the winter. That's not as big of a problem, however, in January, when the sun's angle is more oblique, and when temperatures tend to be colder.

So January is an ideal time to surf Jackson's epically steep terrain, including some of its lower faces, which give skiers some of the best fall lines in the world—especially for skiing powder. 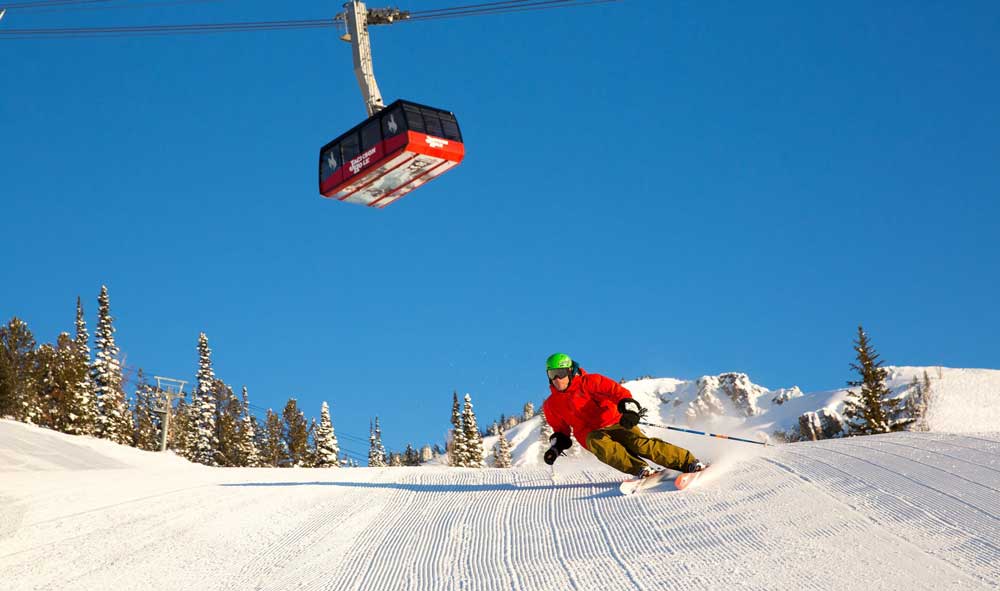 Winter Park, Colorado - January Snow Score: 80.3
Winter Park receives a legitimate 349 inches of snow during an average winter, which places it among the best in Colorado, as well as the entire west. January skiers can bet on this ski resort because it has a small standard deviation and when it piles up snow, it tends to preserve it well, as 50% of the resort's terrain faces north.

Skiing Winter Park in January, for those lucky enough to visit during a storm, can be a boon. The resort is already quieter than many of the ski resorts closer to I-70 in Colorado, and even more so during the January lull following the holidays.


Vail, Colorado - January Snow Score: 79.6
The ski resort that has become synonymous with ski vacations is also a great pick for January, when crowds grow sparse when when snow tends to stay cold and chalky. Vail receives a robust 359 inches of snow per year, making it a standout in central Colorado. This snowfall helps it smooth out all of those gullies and rocky outcrops before many of its brethren.

Forty percent of the terrain at Vail faces north, and its high altitude—peaking at 11,570—helps preserve the snow that hits the ground. Being in the Rockies, Vail is also less susceptible to prolonged droughts that can threaten a January ski trip.

Now it's true that the snow at Mt. Baker, being in the lower-elevation Cascades and closer to the warm Pacific Ocean, tends to hold more water than snow in the Rockies. But the good stuff can fall here, too. And no matter what kind of snow falls, it's almost always the case that enough of it has fallen by January here so that the resort is 100% open.

January is probably the best time to visit Mt. Baker, as the ski area's best time for snow is earlier in the winter, before the storms get even warmer in the Pacific Northwest.


Grand Targhee, Wyoming - January Snow Score: 92.9
Only Alta and Mt. Baker receive more on an annual basis than does Grand Targhee. And with a smaller standard deviation, it's an excellent bet for January skiers.

In addition to its large snowfall totals, Grand Targhee's terrain isn't as steep or as jagged as say, Jackson Hole's, so it tends to ski well very early on in the winter because it doesn't require a deep base of cover on most of its runs.

Only 20% of the terrain at Targhee faces north, but that's not a huge concern in January, when the sun's effect isn't nearly as strong as it can be in late February and March. 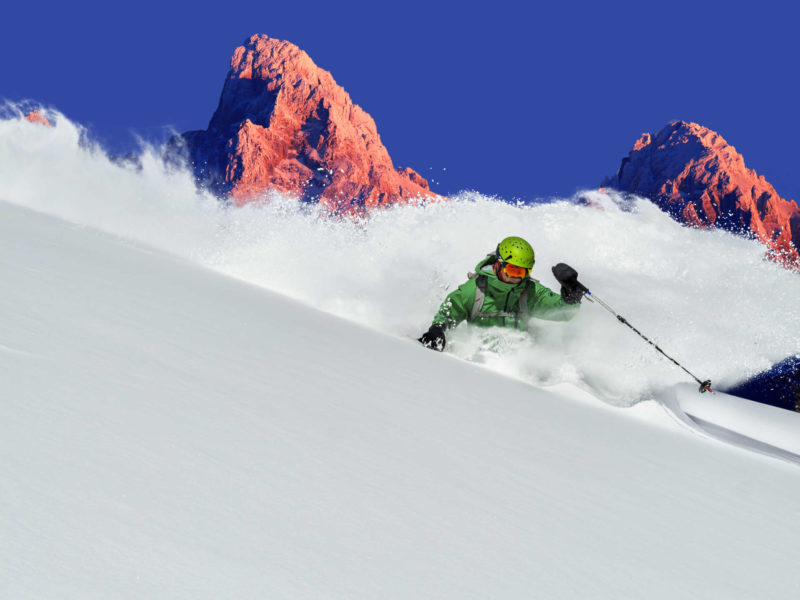 
Steamboat, Colorado - January Snow Score: 77.9
Among Colorado destination resorts, only Wolf Creek gets more snow than Steamboat. With a low standard deviation and higher frequency of snow, Steamboat is usually in excellent shape by New Year's Day, making it a solid bet during the coldest month of the year.

It's also probably the best month overall to visit Steamboat, as the mountain is susceptible to a strong thaw effect in the spring, as only 20% of its terrain faces north and, for Colorado, it has a rather low base elevation of 6,900 feet.

Getting to Steamboat takes a little more effort than some of the resorts that are closer to Denver, but it's well worth the trek in January, when its slopes are less crowded and usually 100% open.

Kirkwood, California - January Snow Score: 81.1
Kirkwood is by far the best California resort to be at during January. It receives more snow, 459 inches, than anywhere else in the state, and it's further helped by a lower standard deviation (less drought) than other spots in the Sierra. Kirkwood owes some of these attributes to its elevation, which, with a base of 7,800 feet, is high for the Sierra. Squaw Valley, comparatively, has a base that is 1,600 feet lower. That makes a huge difference when the rain/snow line can threaten the lower ends of many Tahoe-area resorts.

Kirkwood also benefits from the fact that 65% of its slopes face north—one of the highest ratios in skiing.

The Sierra, because of its drought-prone weather patterns—even Kirkwood is susceptible to this compared with most Rockies resorts—is a tough place to plan a destination trip for January for skiers who are flying in from outside of California. But for those who feel compelled to visit Lake Tahoe from afar during this month, planning a couple of ski days at Kirkwood is a great move.


Christopher Steiner is the founder of ZRankings and a New York Times Bestselling author of two books. Find him on Twitter here.