Epic Pass
THE
LOW
DOWN
Telluride Key Knowledge: Telluride is the best ski town in North America. It's not debatable. Lodging options abound in Mountain Village, a wholly separate town at mid-mountain, which is easily accessible from Telluride's downtown via the gondola, which is free for all to ride until midnight. The oldest ski runs, some of them quite steep, have wonderful sustained fall lines into town, and the newer terrain off of Palmyra peak is legitimate high expert fodder. The main couloir off of Palmyra offers 2,000+ feet of vertical that is unlike anything else in-bounds in North America. Lift lines aren't a thing here.

This should be a bucket-list destination for all skiers. If you haven't been here, go. Lift ticket hack: Like most destination ski resorts, lift tickets here run around $200. But there is a major loophole: buy an Epic Day Pass of four days or more and select 'all resorts.' That allows skiers access to Telluride for as low as $81 per day.

vs
At Telluride, VRBO offers same properties as Airbnb, usually with better cancellation flexibility for skiers

At Telluride VRBO has same units as Airbnb usually with better flexibility for skiers!

Telluride skiing by month:
Telluride
By Month
Data show that March is the best month Telluride for overall snow quality.
DEC
Telluride
in December
JAN
Telluride
in January
FEB
Telluride
in February
MAR
Telluride
in March
APR
Telluride
in April
How Telluride Stacks Up For Different Skiers:
Intermediate Inter-
mediate
ELITE
For intermediates, Telluride offers a comprehensive odyssey in mild to challenging groomers, plus easy-going bump runs for those aspiring to get better. Blue skiers will love the moderate fall lines and and mixed terrain off of Village Express and Polar Queen. The trip to town via blue runs Telluride Trail or Lookout keep skiers coming back to the San Juans season after season.
Beginner
ELITE
Beginners at Telluride get to play on some lifts that offer wide expanses of green terrain with views unmatched anywhere else in Colorado. Beginners can spend days exploring the long green runs on Sunshine Express, and the Chondola lift. For those who who have gained a little more confidence, skiing off of the Prospect lift is a treat, offering a chance to ski the green Galloping Goose for several miles.
Expert
ELITE
Telluride hosts some of the gnarliest in-bounds terrain in North America, including the Gold Hill Chutes, some of which are accessed by stairs bolted to a rock face. Steep fall lines feed into right into town, with monster bump runs such as Spiral Stairs testing experts' mettle. The star is Palmyra Peak, which requires a 1,300-vertical-foot bootpack; skiers must descend a steep 2,000-foot couloir to get down, making it the most unique in-bounds terrain on the continent.
Family
ELITE
There is no better ski town than Telluride, and the marriage between town and mountain is tighter than any other place in North America. A gondola—free to all—connects Mountain Village's heart to Telluride. Kids can run wild and will love riding gondola to grab dinner, a donut or whatever. There's lots of mellow terrain here, and the lodging—especially private homes—is perfect for families.

23.1%
*Special thanks to Tony Crocker and Bestsnow.net. 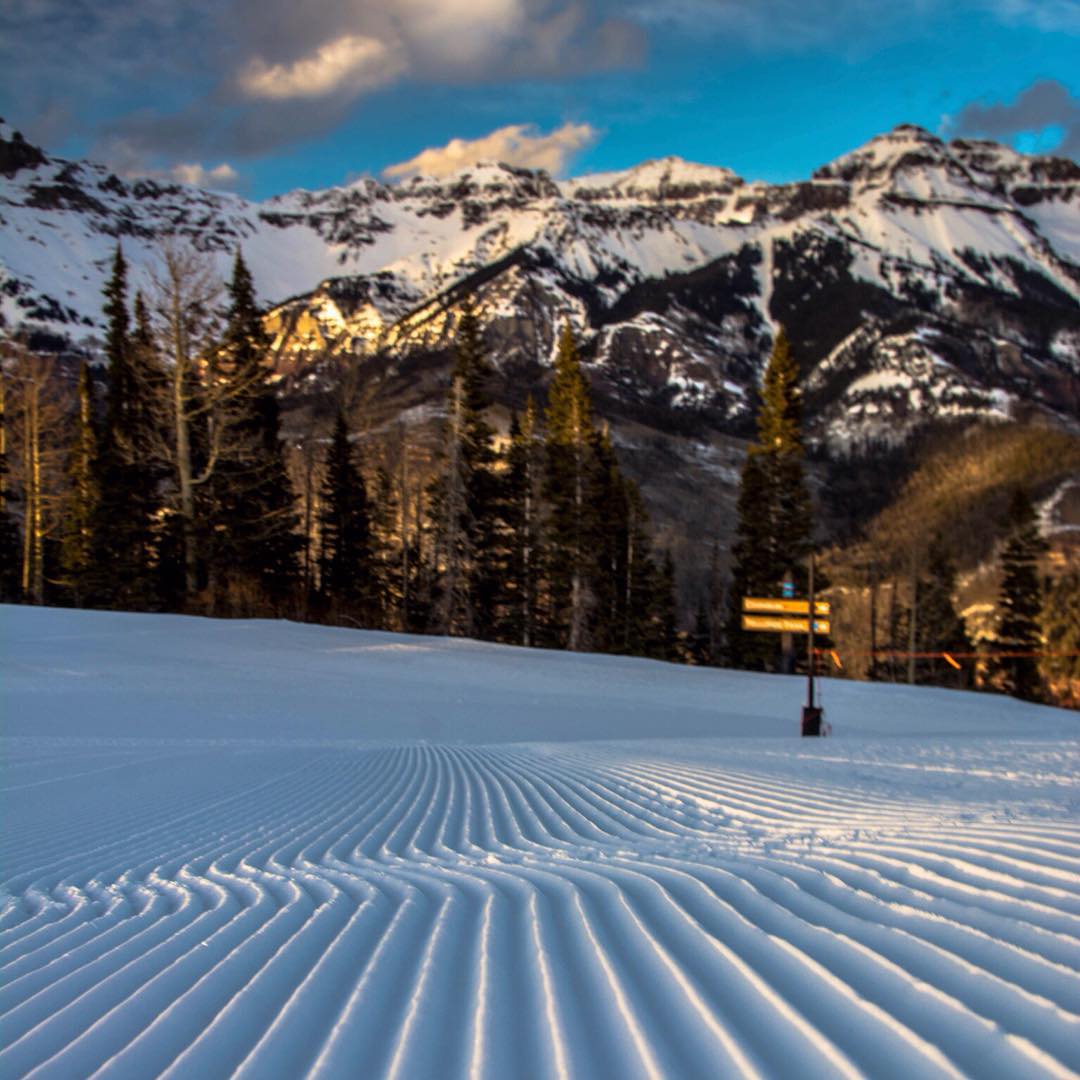 The sun just keeps on shining and the temps sure feel like spring is in the air. What a great day to soak it up! Is #Telluride on your Spring Break bucket list? #bluebirdday 📷: @jakeburch_morephoto 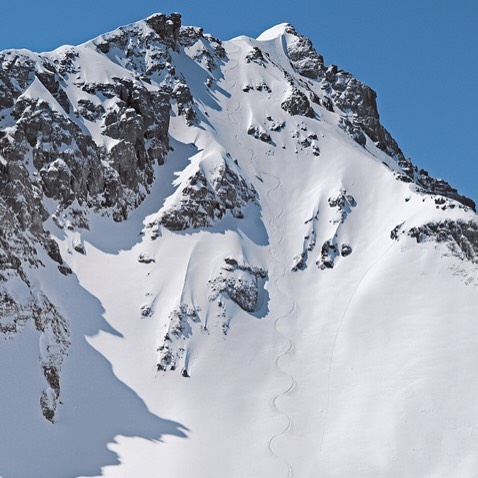 Palmyra Peak is now open! Standing at 13,320 feet with nearly 2,000 vertical feet, Palmyra Peak's hike-to terrain offers breathtaking scenery with some of the most spectacular in-bounds terrain in the country. Hiking times are estimated at between 1 - 1.5 hours past Black Iron Bowl. #telluride #hiketoterrain #palmyrapeak 📷: @brett_schreck 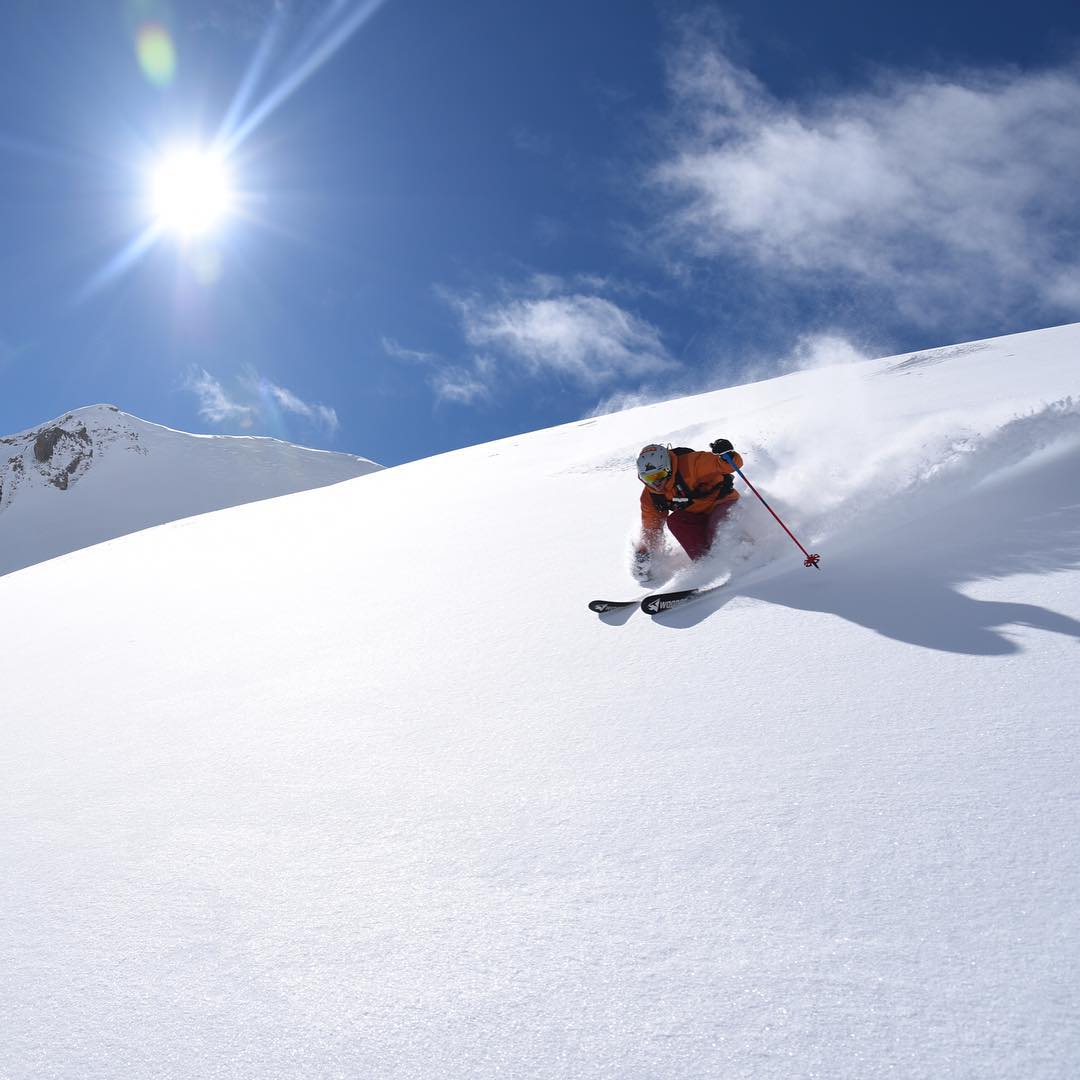 Here's a little taste of what's up for grabs around #telluride. @brett_schreck snapped this on a recent trip with @telluridehelitrax. 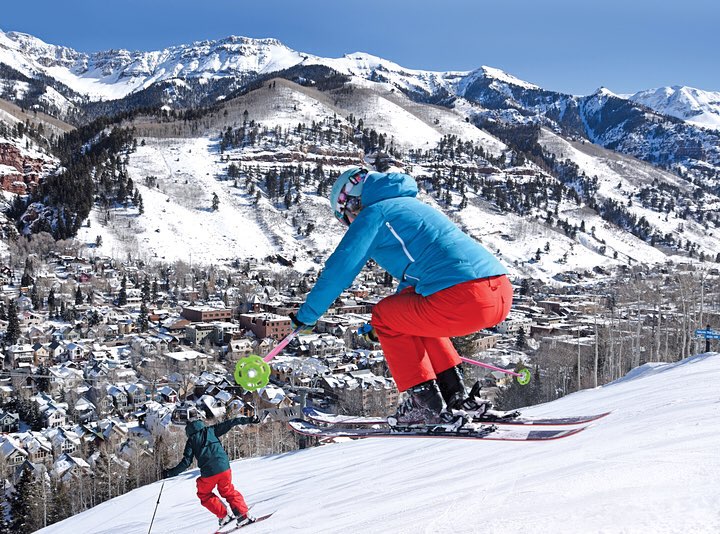 Today is International Mountain Day and more snow is on the way! We will be celebrating in #telluride by opening new terrain on the mountain tomorrow! Look for ski access to town and expanded terrain off Lifts 7, 8 and 9 including the Plunge, Coonskin and Telluride Trail. #internationalmountainday 📷: @brett_schreck 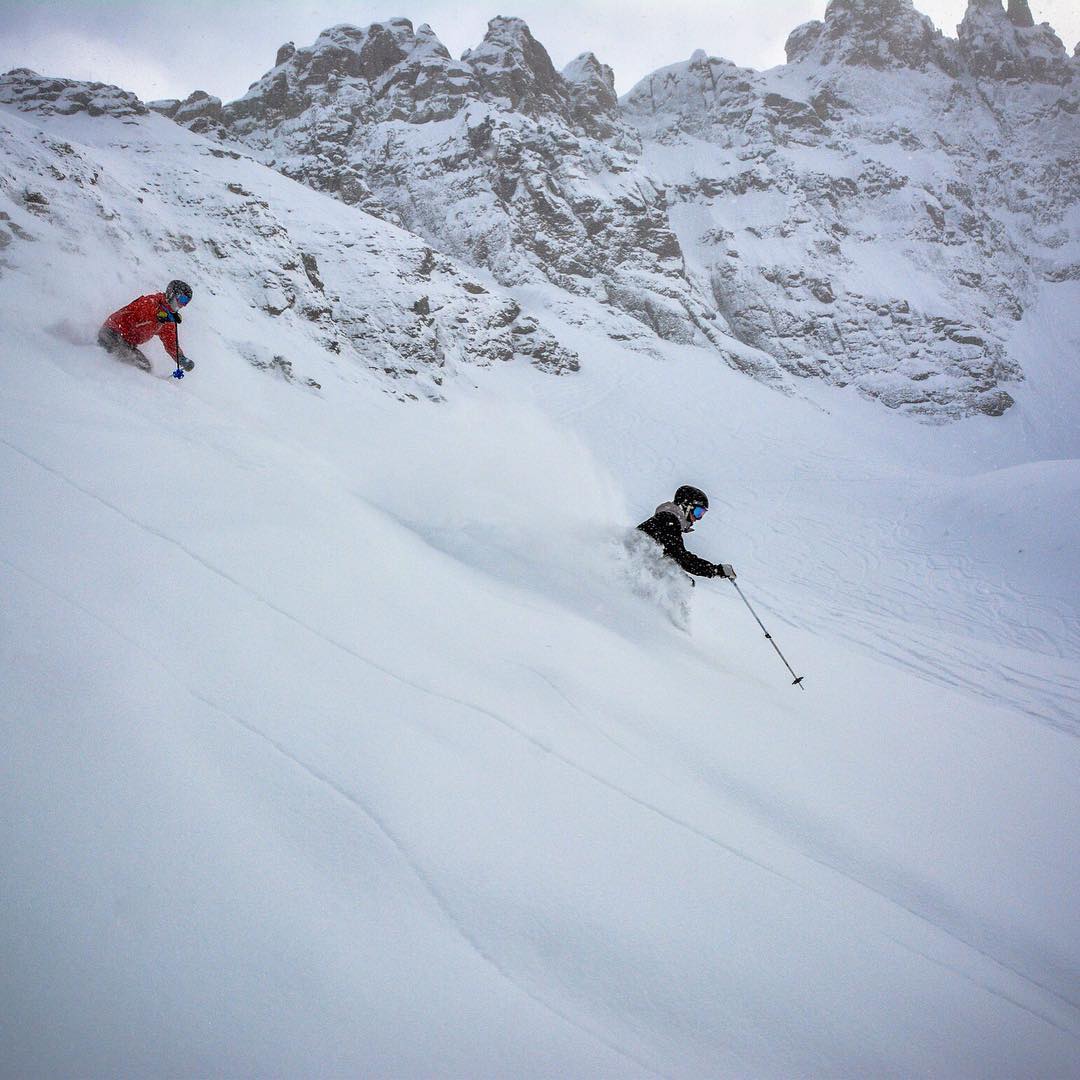 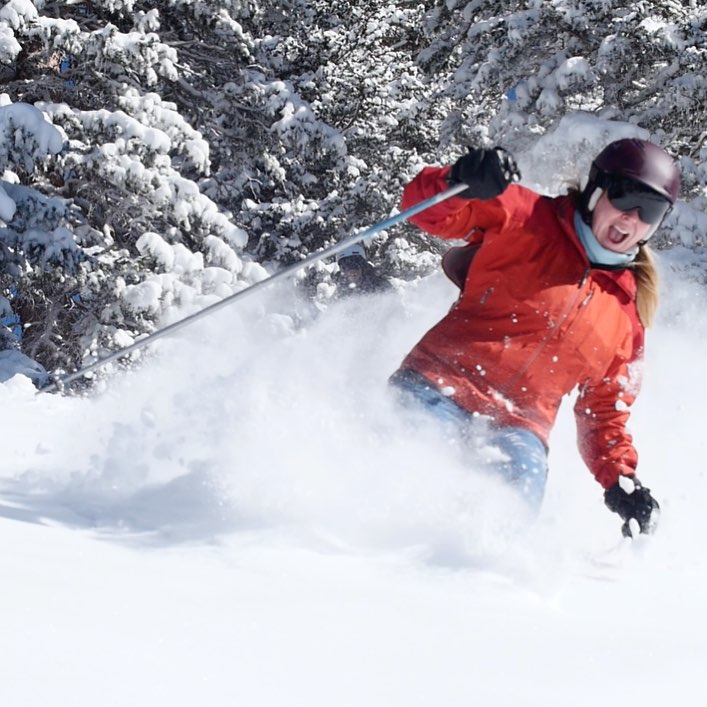 Today was a really good day! @shan1380 was all smiles after finding #whitegold on Millions this morning. #telluride #telluridesnow #goldhill #powderday #twsw 📷: @bsegelke 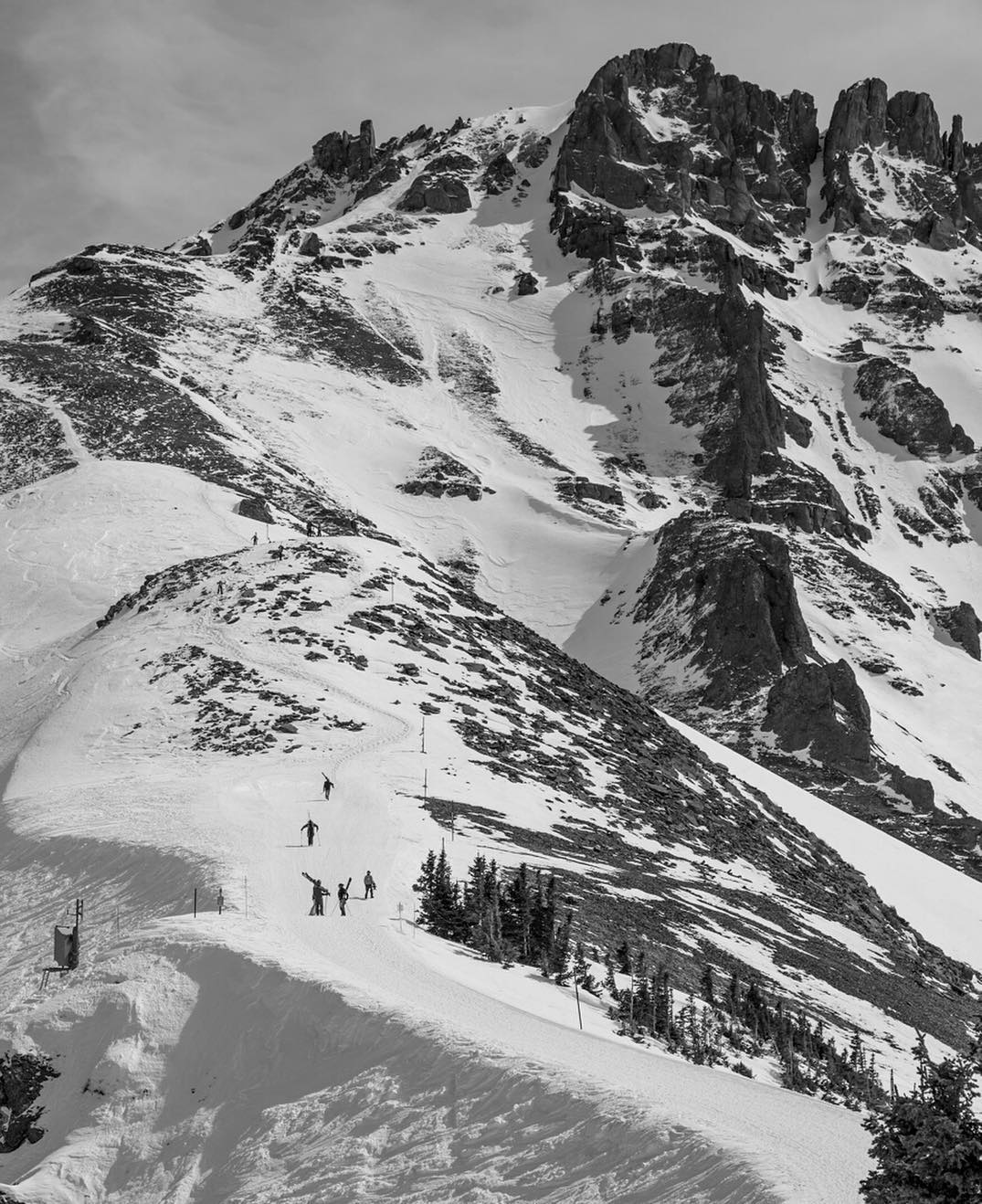 One more week to hike the peak. With closing day approaching, we hope you get out and ski under our inbounds 13er, Palmyra Peak (13,320'), which is visible from nearly every run on the Mountain Village side. #Telluride #TellurideMoments #DiscoverTelluride 📷: @stephenshelesky 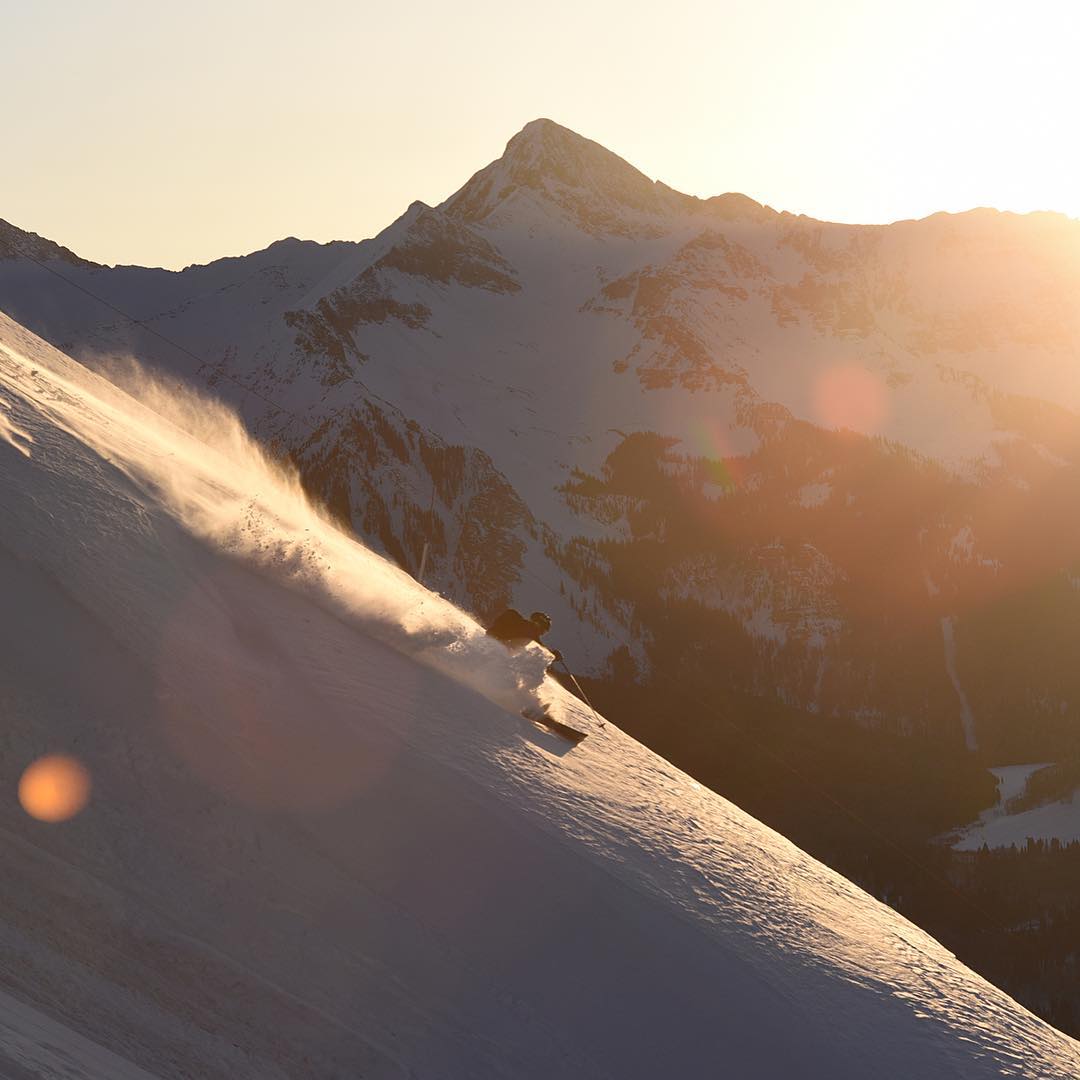 Catching every last ray of sunshine. We are loving the longer days here in #Telluride! #telluridemoments 📷: @brett_schreck 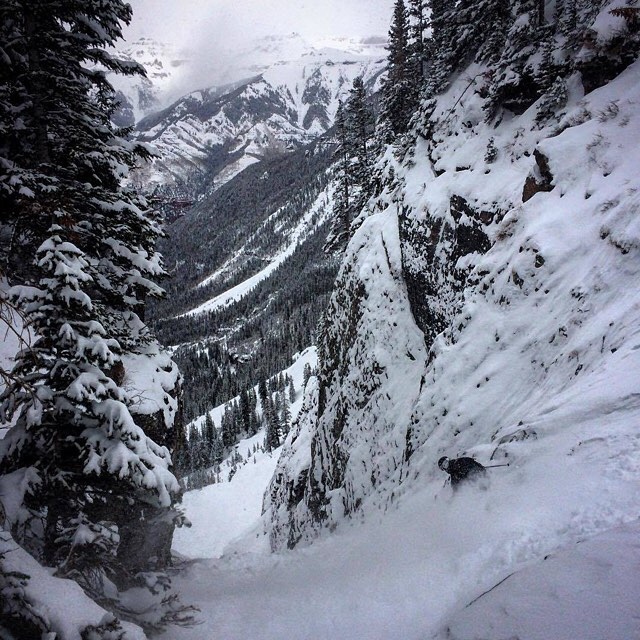 A pretty incredible #tbt to one of many powder days this past season. What is your favorite memory of the 2015/2016 ski season? #DiscoverTelluride #Telluride 📷: @robwhiting1210 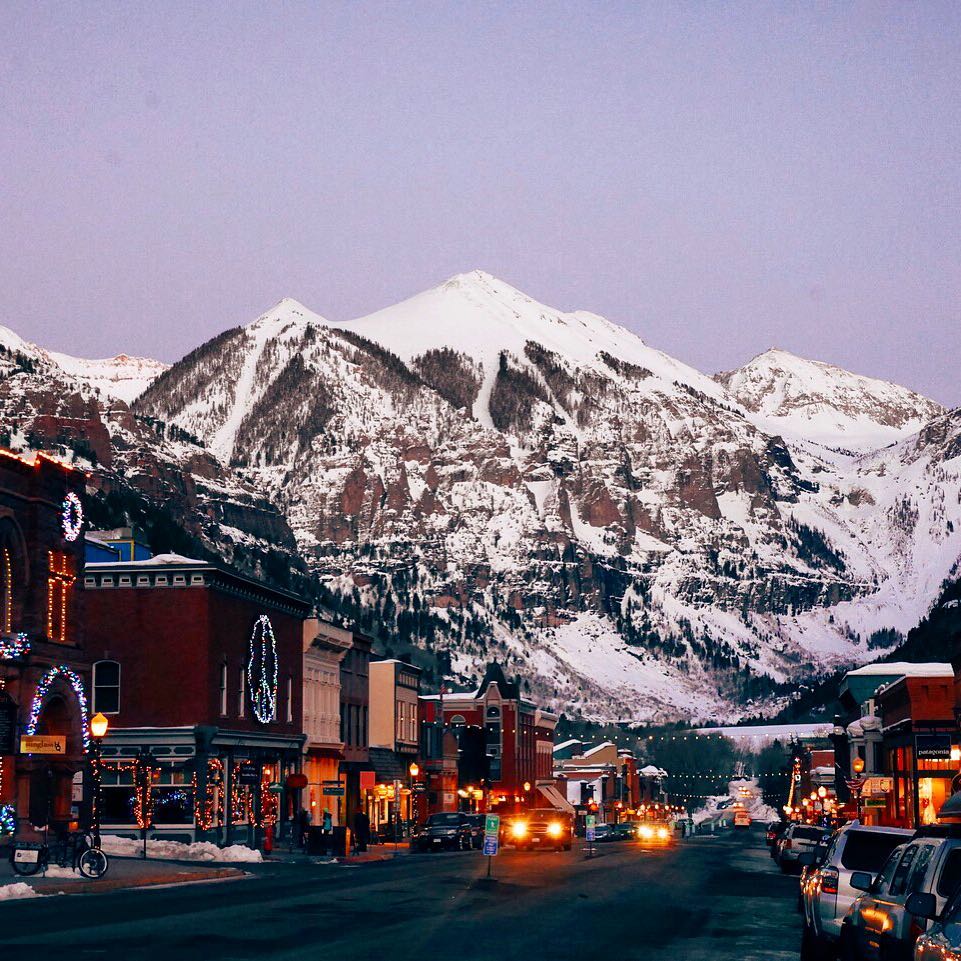 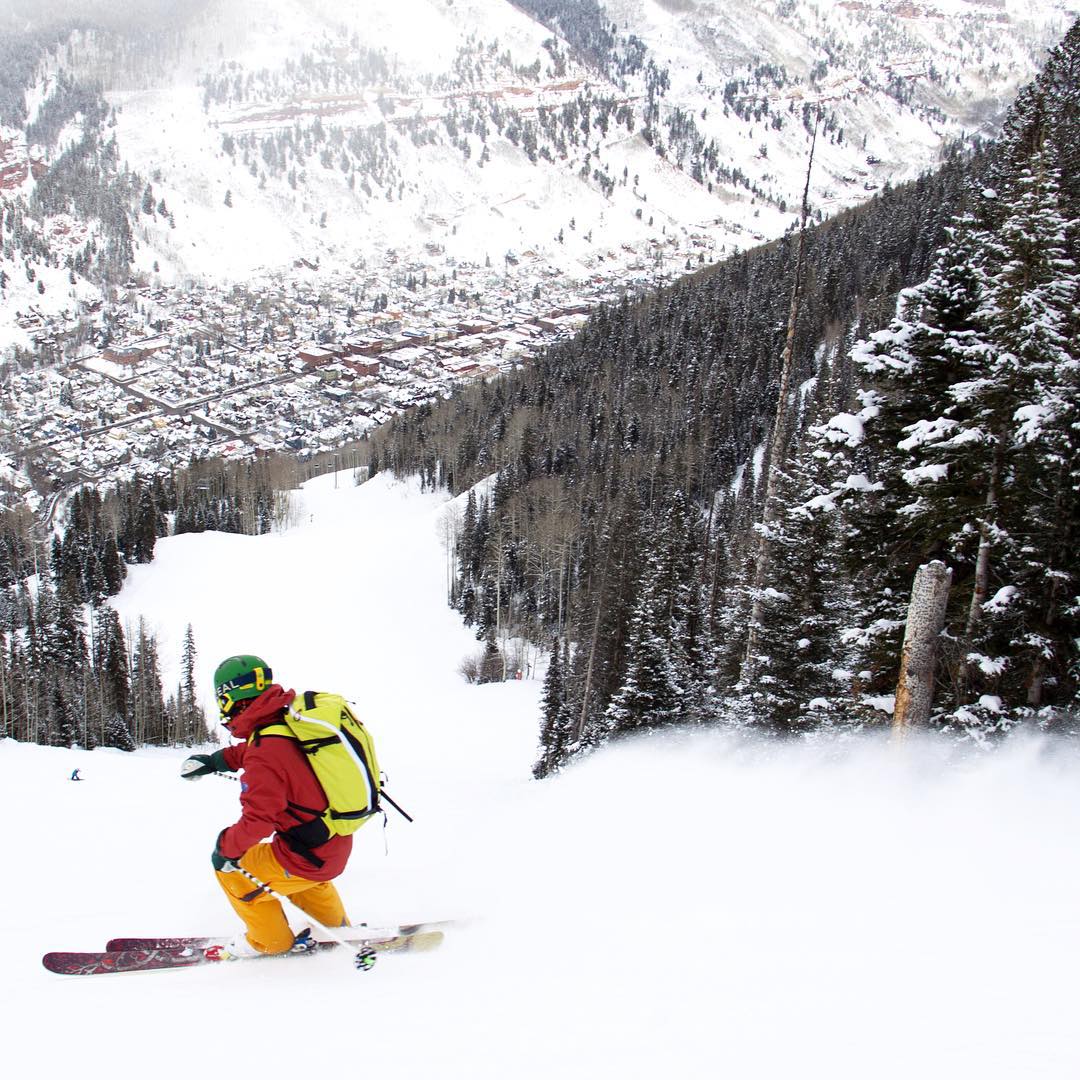 Today was a great day to be on the slopes! Conditions are soft from the recent snow that fell over the past few days and more is in the forecast through the weekend! #telluride #telluridesnow

The Skiing at Telluride

The big news, as of January 2018, is that Telluride has joined the Epic Pass. Epic Pass holders will receive up to 7 days of skiing at Telluride beginning in the winter of 2018-2019. Telluride will cease being a member of the Mountain Collective at this time.

The terrain at Telluride is as varied as anywhere. Gobs of family-friendly cruisers, lots of long bump runs with fall lines approved by Olympic moguls skiers, some legitimate steeps, and an expanded array of hike-to terrain that gives intrepid types plenty of lung-throbbing, quad-crushing stairmaster action. Some of our favorite runs in all of skiing reside on the north-facing slope of the lower mountain at Telluride, the terrain that spills straight into town. These runs don’t end at the edge of town, or up a few blocks from the start of town in earnest. They’re literally right in the middle. Skiers can go from snow to shopping for bread in 120 seconds.

For those who like classic Western bowl skiing, Telluride’s Revelation Bowl, terrain opened in 2008, is the right prescription, although it is, like many bowls, utterly unsheltered. Because of that, some of the high-up runs on the other side of the ridge, where trees are thick and protection is ample, provide better skiing when it’s dumping or windy.

A big dump in Telluride is one of the best things in skiing, if not the best. The mountain is far from a big metro area that will release thousands of otherwise-dormant hounds with a big snowfall and the town of Telluride is simply small, with only 3,600 people living in town and Mountain Village. Compare that with Jackson, Wyoming, which has three times that population, but is still a small place by any measure.

We wrote a lot about the town here because there's an astounding amount to say. And this has actually been edited down quite a bit. With no further adieu:

Telluride is a place to which a lot of otherwise well-traveled skiers have never been. They’ve certainly heard about it, but not being in that Central Colorado wheelhouse of resorts that stretches from Aspen through Vail and east to Copper and Breckenridge—and within three hours of Denver—keeps the masses away from this classic movie set of a town in the San Juan mountains.

If you were to rank the ski towns of America, something we enjoy to do here, Telluride is ensconced in the top 3 along with Park City and Aspen. A clear delineation separates these three towns from No. 4, Steamboat Springs, and the rest of the lot. So the town of Telluride comprises a major piece of the appeal to this place, with its Old West facades along Colorado Avenue and the shadowing canyon whose walls buttress the town from three directions: north, east and south.

The road that brings you in from the west ends an 80-minute journey from the airport in Montrose, Colorado, which is moderate in length and its white-knuckle quotient. This drive scores a 10, however, for scenery, more so than perhaps any other drive from airport to ski resort in the U.S., and there are more than a few splendid ones. After clearing the Montrose area, the drive gets interesting. Travelers pass through Ridgway, a town that’s caught on with a lot of outdoor-types drawn to Southwest Colorado who can’t afford the real estate in Telluride. Being the province of skiers, climbers and cool people, Ridgway has added good coffee, eateries and a vibe of progress during the last 10 years.

From this up-and-comer of a town, the drive heads into something we’ve referred to in the past as Billionaire’s Valley, because it’s home to, at last check, the ranches of at least three billionaires, most prominent among them being Ralph Lauren and his Double RL Ranch, which claims some of the most scenic country in North America.

People arriving in Telluride for the first time will feel like a child at Christmas for at least the first 48 hours. Descending the true fall lines of the oldest part of the ski resort, the part that leads straight into town, skiers get a clear shot of what could be the quintessential postcard image for a ski vacation: sheer canyon walls, several dozen blocks of a tightly-packed town from which rise cables carrying ski chairs and a gondola.

Ah, the gondola. The Telluride gondola is the ski town equivalent of New York’s Lexington Avenue subway lines (4,5,6). Everybody rides the gondola everywhere, from the town of Telluride, to the top of ridge facing town, down into Mountain Village, the independent town in the middle of Telluride’s upper mountain and where most of the lodging is located. The lift is open all day until midnight and is free for all, rendering cars utterly useless for visiting skiers.

So many places, too few trips to Telluride. It's hard to pick one, but we love Mountain Lodge for its quiet and it's easy trip to the slopes. Alternatively, staying in town rather than Mountain Village takes the altitude quotient down to 8,750 feet, which for some people is noticeably better for sleeping that Mountain Village's 9,500 feet.

A few words on the Snow at Telluride Ski Resort

Telluride’s snow record is typical for Colorado. 11.2% of winter days with 6 inches or more of snow and 24% of winter months with 30 inches or less are middle of the pack for western destinations, while 5% of months with 90 inches or more is on the low side. Snow density as in most of Colorado is as light as it gets. Fortunately competition for powder at Telluride is less intense than most places due to its remote location.

Telluride averages about 70% open at Christmas, and is less than half open by Christmas in 15-20% of seasons. The consistently pitched chair 9 advanced terrain is usually open for the holidays, while the most rugged Gold Hill Chutes may not open until February. Even by Colorado standards Telluride’s snow preservation is outstanding. It’s half north facing and ski elevation is 8,700 – 12,600 feet. Surfaces are mostly packed powder right up to the early April closing date.

ZRankings & Ski.com have lodging/lift packages up to 40% off for Telluride