The Best Ski Resorts For Texas Skiers
BY Les Houches

As a state, only California has more skiers than Texas. And many of California's skiers never leave the state, choosing to ski the Sierra exclusively. That makes Texas perhaps most important destination market to ski resorts in Colorado, Utah, Montana and Wyoming.

With this in mind, ski resorts have been trying to cater to Texans for some time as it makes great business sense. Some ski resorts do it better than others, however, and we are here to spotlight those, and to explain why they're a superior fit for the millions of Texans who enjoy taking to the snow.

As make sense for such a consequential ski market, Texas has great air service directly into not only Denver and Salt Lake, but also all of the regional ski town airports across the West.

American Airlines runs more ski flights out of its Dallas hub than any of its other airports, and it uses the Texas airport as something of a clearinghouse for skiers coming from all over the continent to destinations in the mountains. Of the large cities in the United States, excluding Denver, only Chicago has better service than Dallas into ski town airports.

Houston is awash in ski flights, too, as it is a hub for United, which is generally the strongest airline for flying to ski destinations, as it brings skiers in on direct flights from all over the country.

In addition to judging ski resorts based upon the ease of travel from Texas, we also factored in some of our other favorite criteria: the town, lodging, snow quality and terrain.

Here are the best ski resorts for skiers from Texas:

Telluride
This one is not a secret. Anybody who's been to Telluride in March knows that the ski resort becomes a province of the Lone Star State during spring break. The average number of Texas state flags one spots on a single chairlift ride is about 25.

And why wouldn't Texas skiers flock to Telluride? It's a ski resort with everything, Plus it's rooted in Southwest Colorado, a region that, much like Texas, has a particular Southwest flair to it.

United takes planes from Houston directly into Montrose, Telluride's regional Airport, once a day, and American Airlines makes the trip from Dallas twice a day. 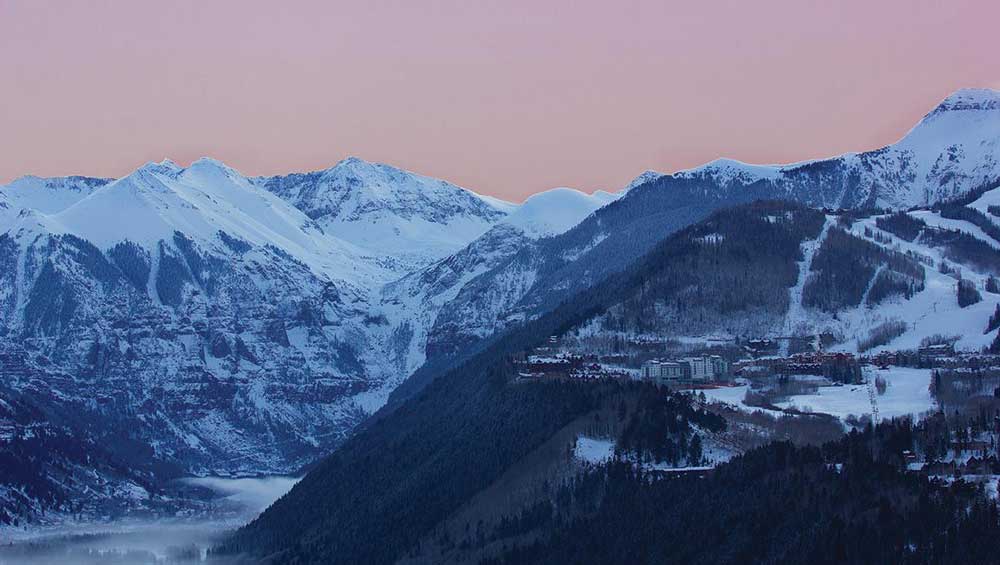 Telluride is a unique place in the world, and an easy hop for Texans - Courtesy: Telluride

Aspen
There's no better ski town airport and that of Aspen. Once skiers land, the slopes sit a mere 10-minute walk away. Texas has an abundance of flights into Aspen. Dallas skiers can wake up in their own beds at a decent hour and be skiing Aspen Mountain before lunch.

With four mountains, Aspen has a flavor profile for everybody. Buttermilk is perfect for beginners and kids; Highlands for the enterprising, boot-packing powder seekers; Aspen Mountain for the old-school Bogner crew; and Snowmass for groups who seek a little bit of everything in one big mountain.

Steamboat
Texans make up the largest percentage of Steamboat's out-of-state customers, so the resort knows how to welcome skiers from the Lone Star state. Many Texans will feel at home here, as Steamboat is a town that fully embraces its Cowboy heritage. From time to time, horses can be seen tied up in the supermarket parking lot, alongside ski-carrying cars.

Both Dallas and Houston enjoy excellent air service direct into Hayden-Steamboat, a regional airport that's only 20 minutes from town. With this kind of set up, Texans needn't even worry about a car if they're staying in town or right up next to the mountain. Free buses get skiers everywhere they want to go.

The mountain at Steamboat is especially welcoming to beginners and families, as there is lots of rolling terrain and wide open groomers. Steamboat is one of the classic ski towns in all of North America, and its genuine qualities will impress even the most hardcore Texas Cowboy. 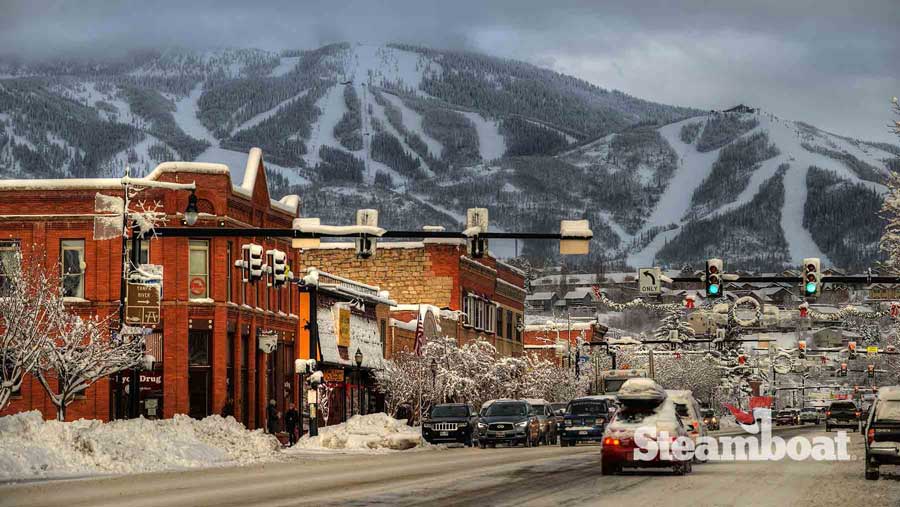 Vail
Air service into the Eagle-Vail airport is among the best in skiing, and there is no shortage of flights streaming in from Texas. Both Dallas and Houston often have multiple flights per day going into this modern airport that sits on a plateau about 30 minutes west of Vail.

With these flights, especially when there are more of them during the holidays, Texas skiers can pull off that most satisfying of travel tricks: to ski and fly on the same day. It's something that can be accomplished on the way in and the way out, if the flights line up correctly.

Vail's vast acregage give Texans tons of terrain to stretch out within, something they're used to, as they hail from the largest of the lower 48 states. With a shuttle from Vail-owned Colorado Mountain Express, Texas skiers can forgo a car. Vail Village requires an entire week to explore on its own, and the dining options impress across the board.

Park City
Flying into Salt Lake City from Texas is an absolute snap, as there are directs coming from not only Dallas and Houston, but also San Antonio and Austin, via Delta Airlines, which keeps its western hub in Salt Lake.. Park City sits only a 35-minute drive from this major airport, which is what makes skiing Utah unique from a travel perspective. There are directs into Salt Lake from most major cities.

Texas skiers can take an early flight in and get to the slopes that day, if they're expedient with changing clothes and wrangling their equipment to the resort. The flight to Salt Lake City is longer than those to Colorado, but only by 40 minutes or so. One of the great things about having the Utah option so handy is that the state gets snow at a greater rate than almost anywhere else in North America, so even early ski trips, in December and early January tend to work out brilliantly in Utah.

The town of Park City offers an unrivaled combination of convenience, ambience and lodging options, all way way up to five star hotels at Deer Valley, down to golf course condos near town. It's an excellent staging area for Texans looking to get away quickly to an elite ski town that's almost always well stocked with snow. 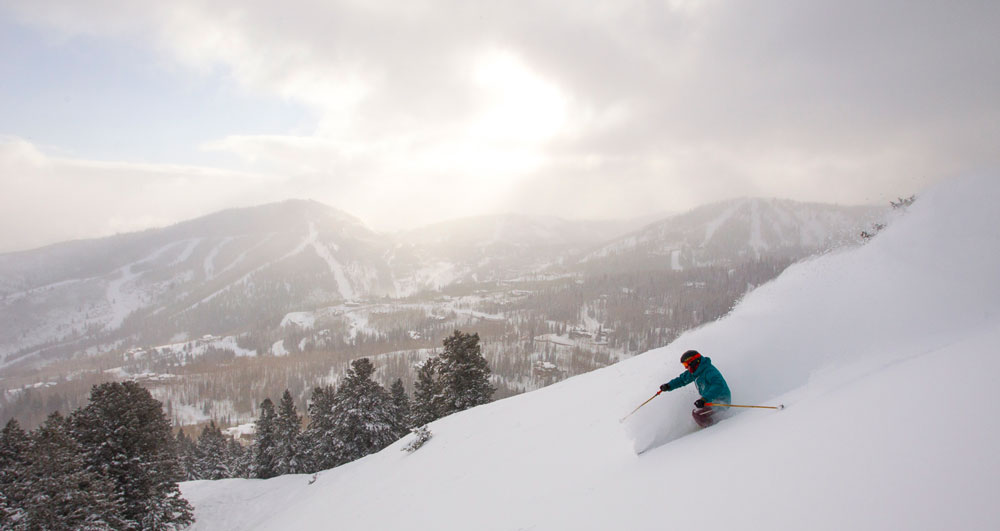 Park City brings a potent combination of town and mountain, and is 30 min from Texas-friendly airport - Courtesy: Park City

But don't be fooled by the luxury hype—this place has serious terrain, too. The ski resort is chock full of long and true fall lines that give skiers some of the best vistas in central Colorado.

This canyon is home to the best snow on the continent. It falls often, in large quantities, and is almost always of a high quality, the kind of dry snow that Utah brags about on its license plates. For Texas skiers looking for a quick weekend getaway where they want high odds on great snow, there is no better bet than a quick flight to Salt Lake and a couple days at Snowbird and Alta.

Northstar
Both Houston and Dallas have direct flights into Reno. From there, it's a quick and easy sprint up I-80 to Northstar, about 45 minutes. Getting to Squaw Valley only takes another five minutes or so.

Northstar, owned by Vail Resorts, has positioned itself as the Beaver Creek of the Tahoe region. Its updated village offers excellent on-hill lodging, including a Ritz-Carlton, and there is a growing cadre of excellent restaurants at the base.

One of Northstar's strengths, as a ski mountain, is in its long and straight groomers that head down predictable paths at the perfect angles of steepness: not to steep, not too mellow. Northstar's best quality, however, is in its gladed tree skiing, where robust Jeffrey Pines are spaced at perfect intervals for turns in powder.