Pro tip: It's hard to find a crowd at this place, as there are usually more acres to ski than people to ski them. Note: Big Sky is in both the Mountain Collective lineup and the Ikon lineup. The scenery is majestic. The tip-top of the mountain offers legitimate expert terrain, but Big Sky's strength as a ski resort is in its intermediate terrain, which rolls on forever. Lodging is easy, and the village has seen massive upgrades during last five years.  MORE

17.8%
*Special thanks to Tony Crocker and Bestsnow.net. 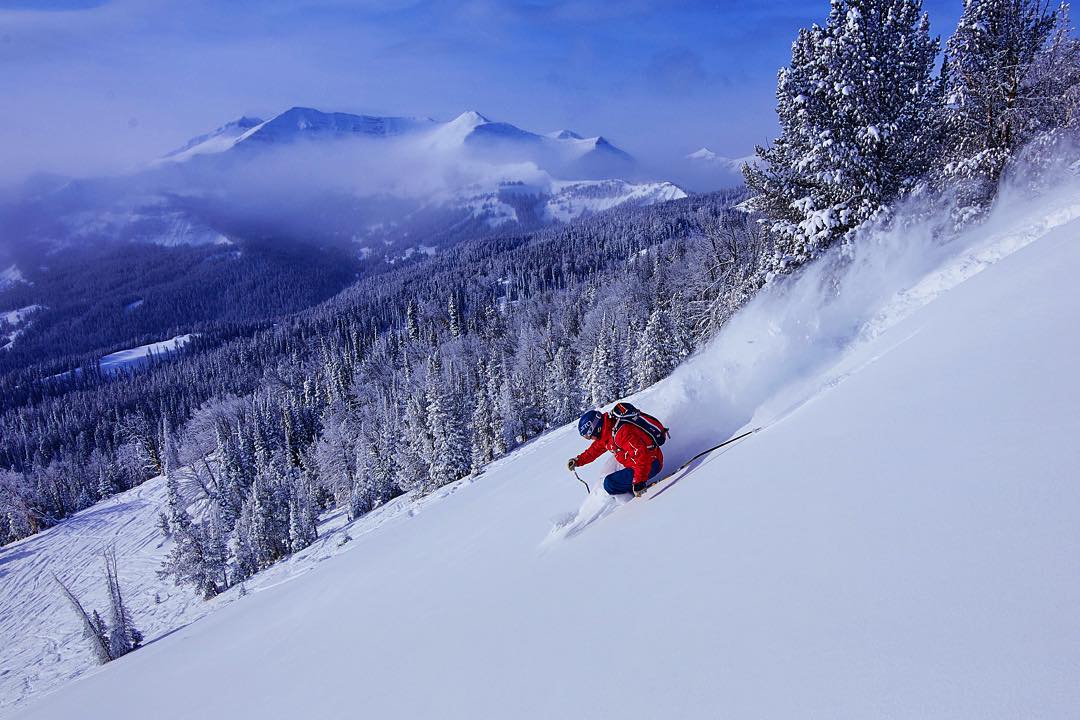 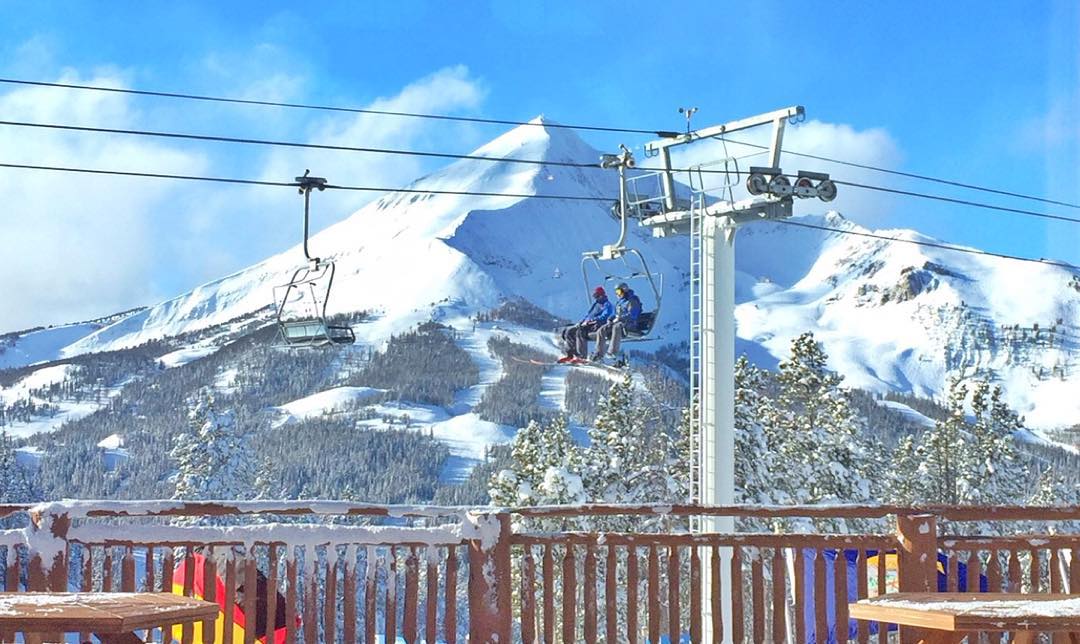 This is the view from Everett's 8800! Nothing like burgers beer and bluebird skies on a pow day! -@brinjatheninja #BigSkyResort #Bluebird #beauitful #ski #ride #relax #Montana 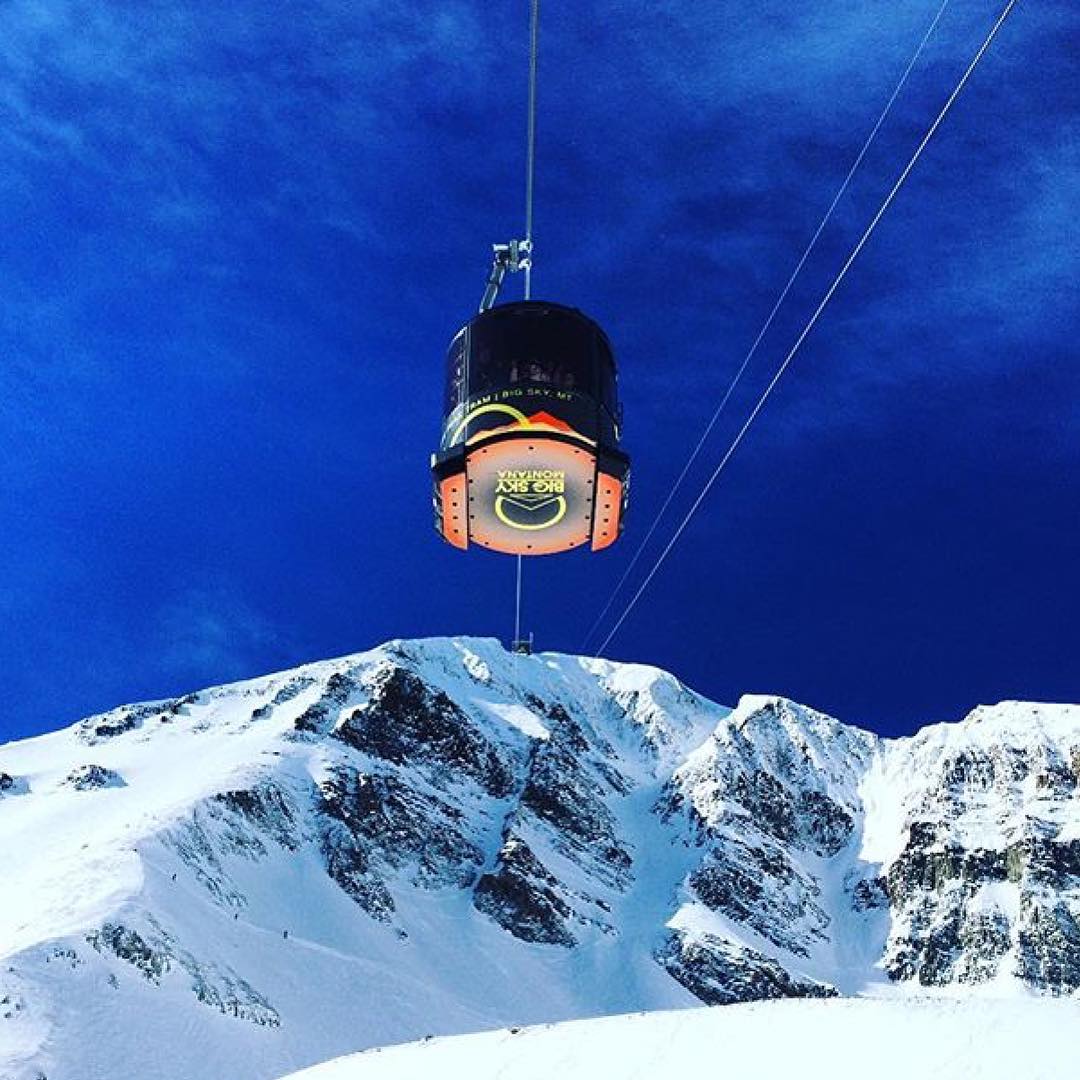 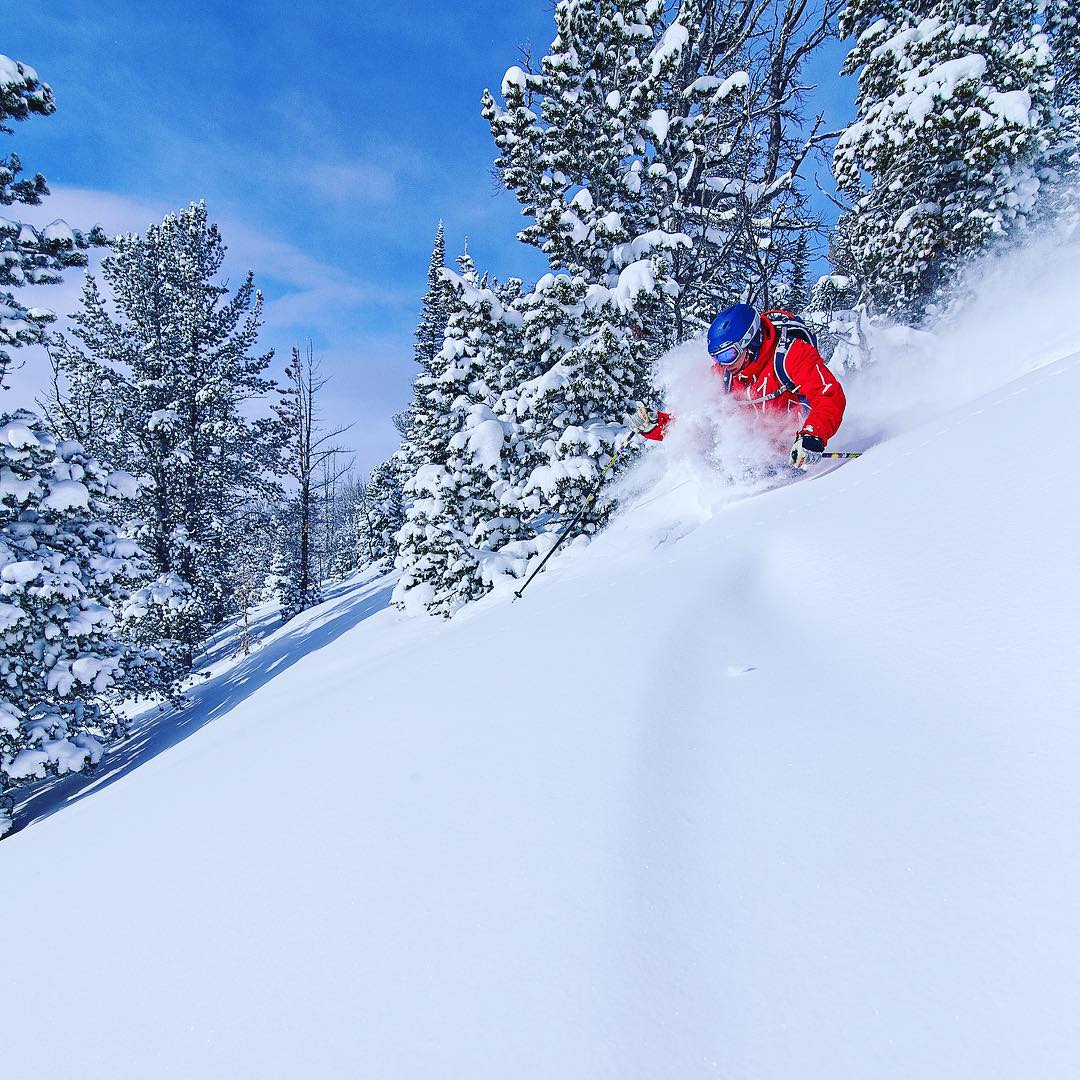 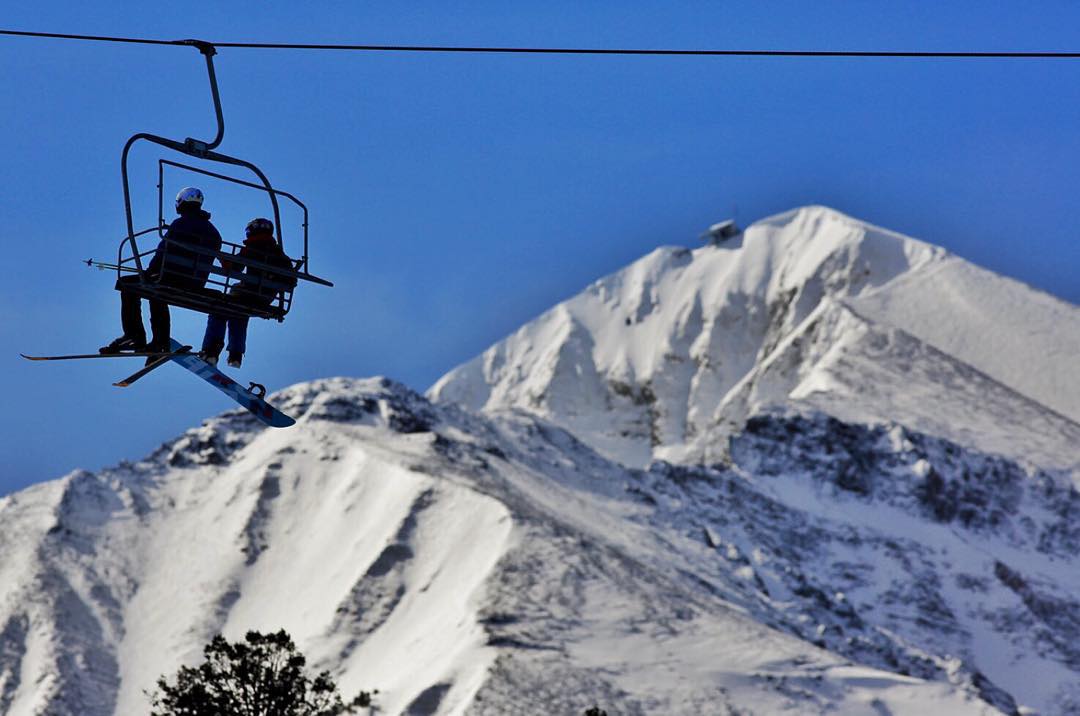 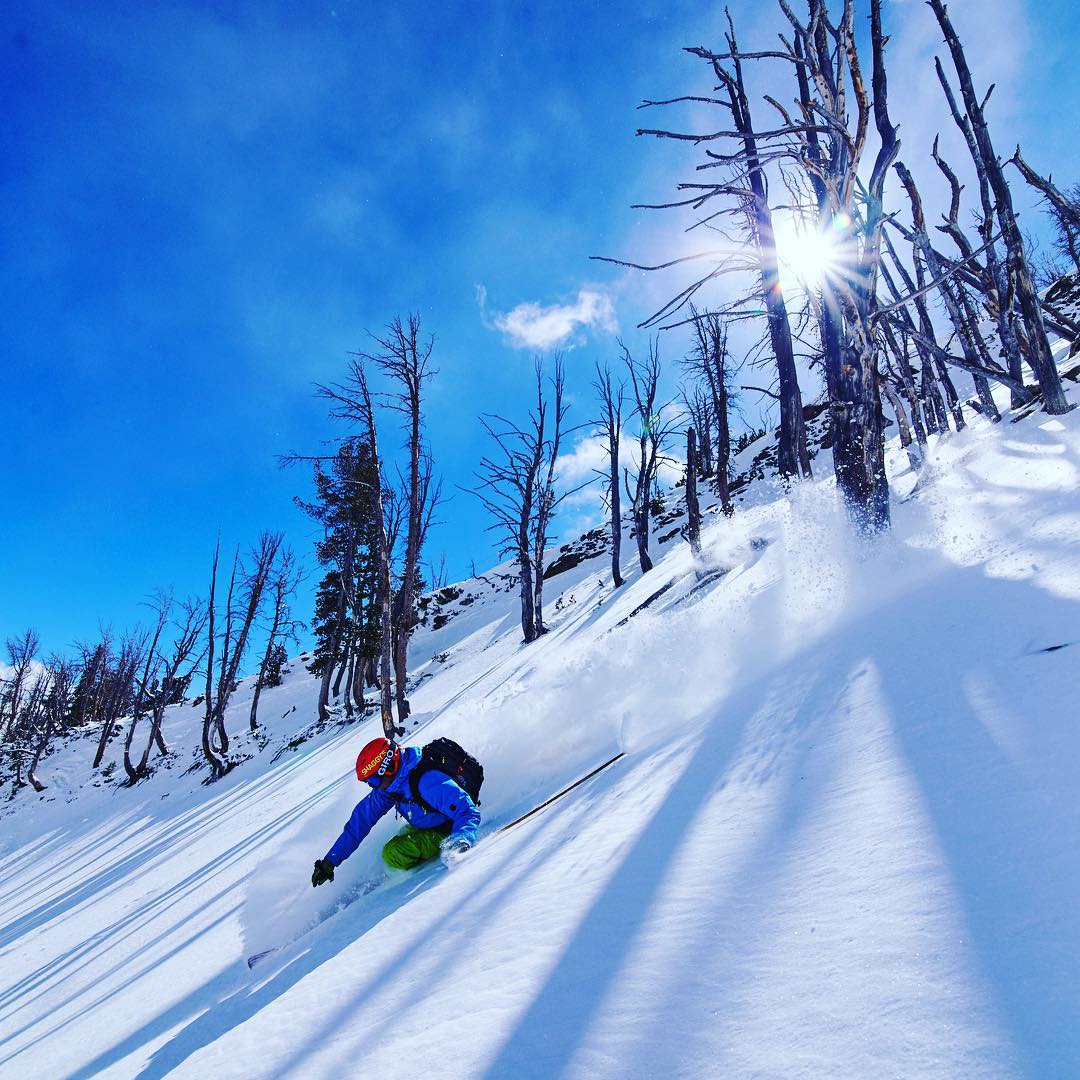 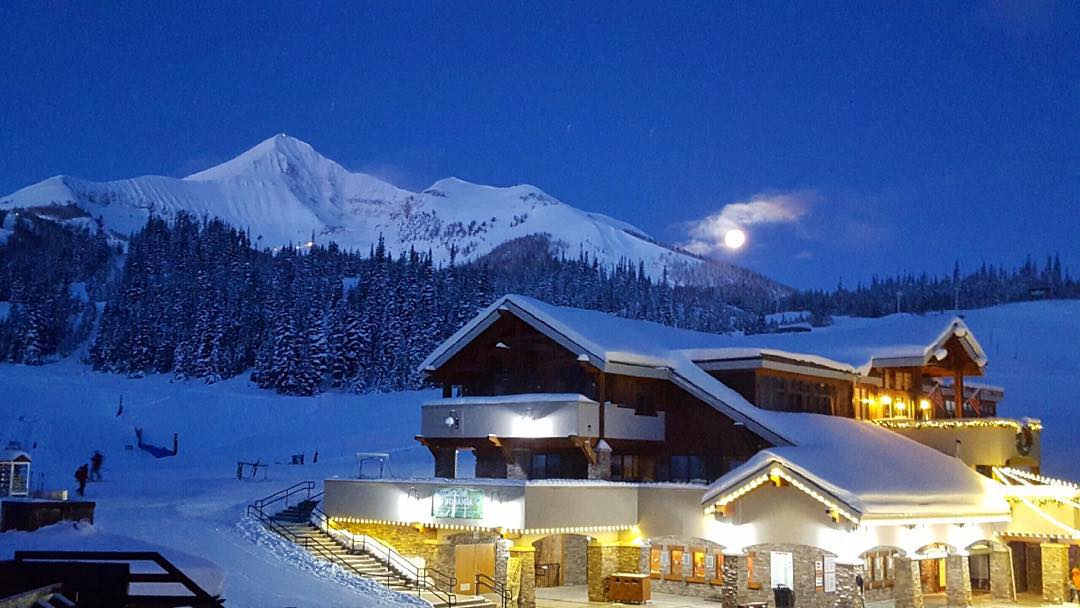 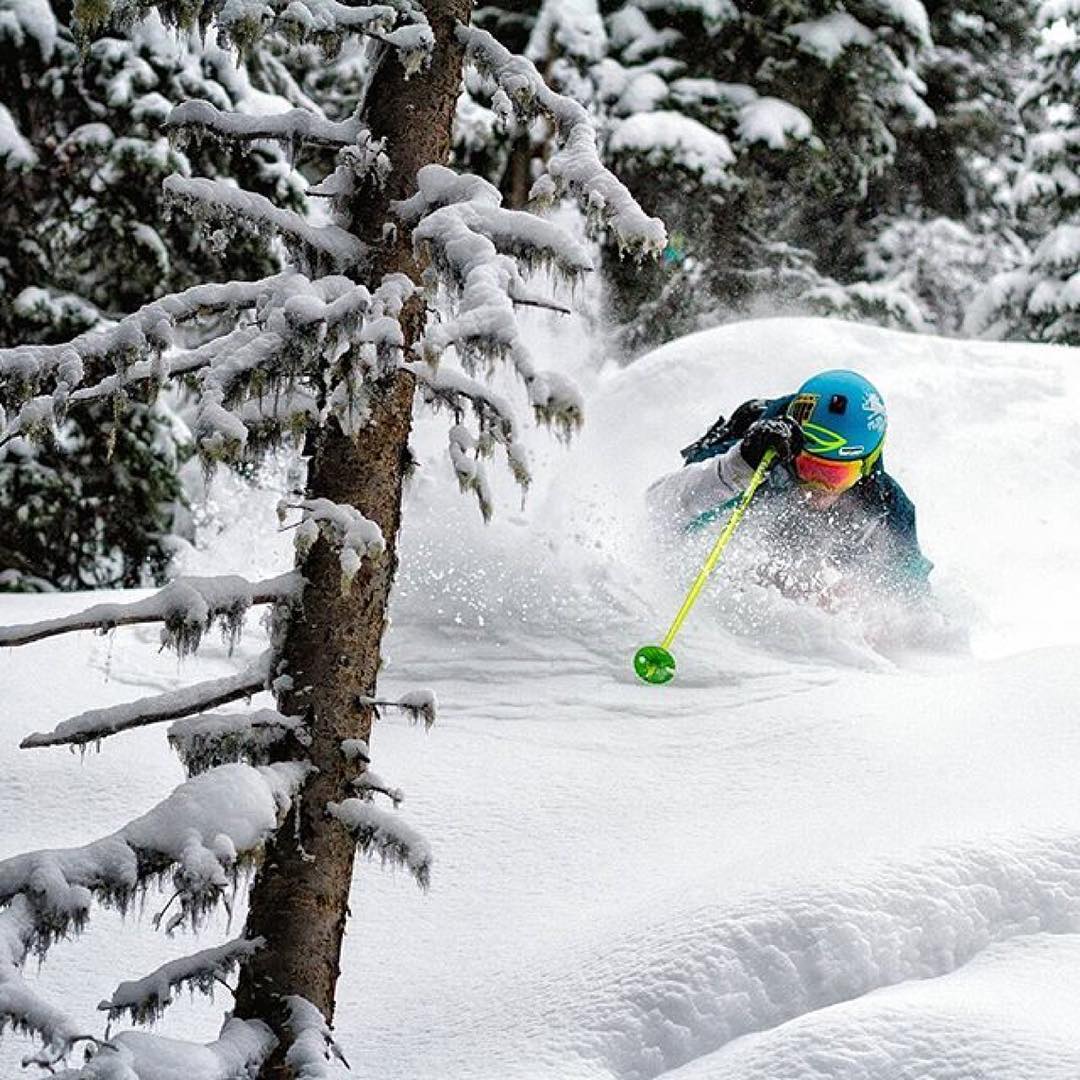 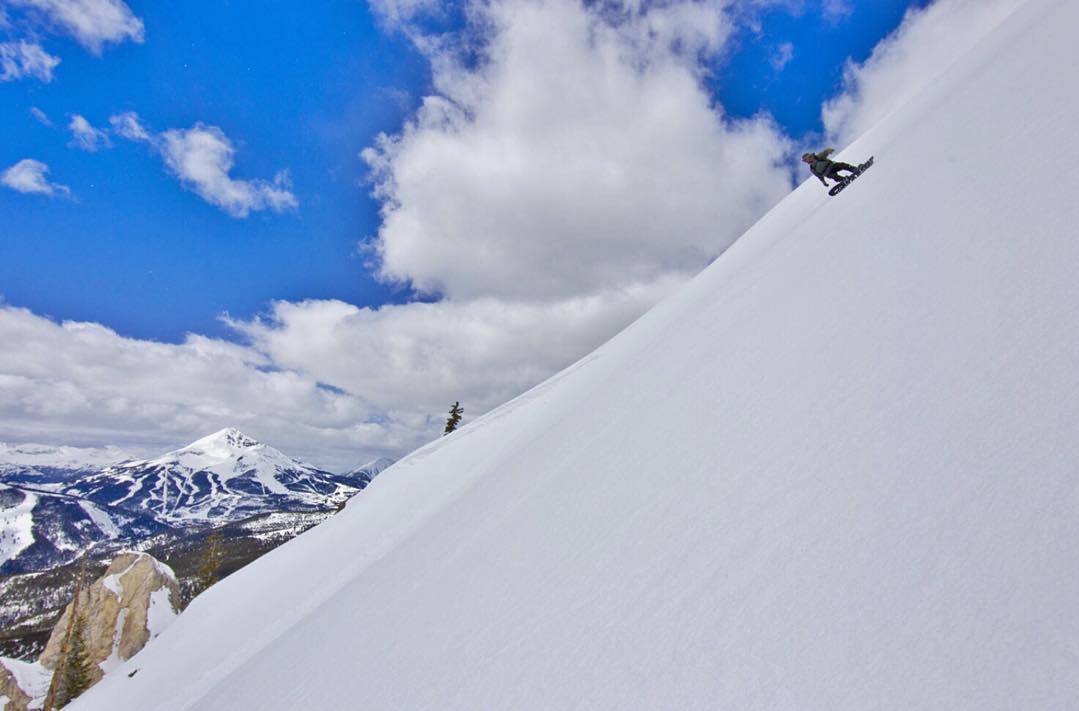 Big Sky Resort has over 5,800 acres with an average of 2 acres per skier, you get more slope time with a fraction of the skiers found at metropolitan resorts of similar size, consistent snowfall, and the best mix of terrain ability for seamless skiing between 4 mountains. Then of course we have Lone Peak standing at 11,166 feet with views of three states and 2 National Parks. This is why we are #TheBiggestSkiinginAmerica ❄️ photo: @kenesperry #Bigskyresort #getoutstayout #ski #ride #northwestisbest #adventure #nature 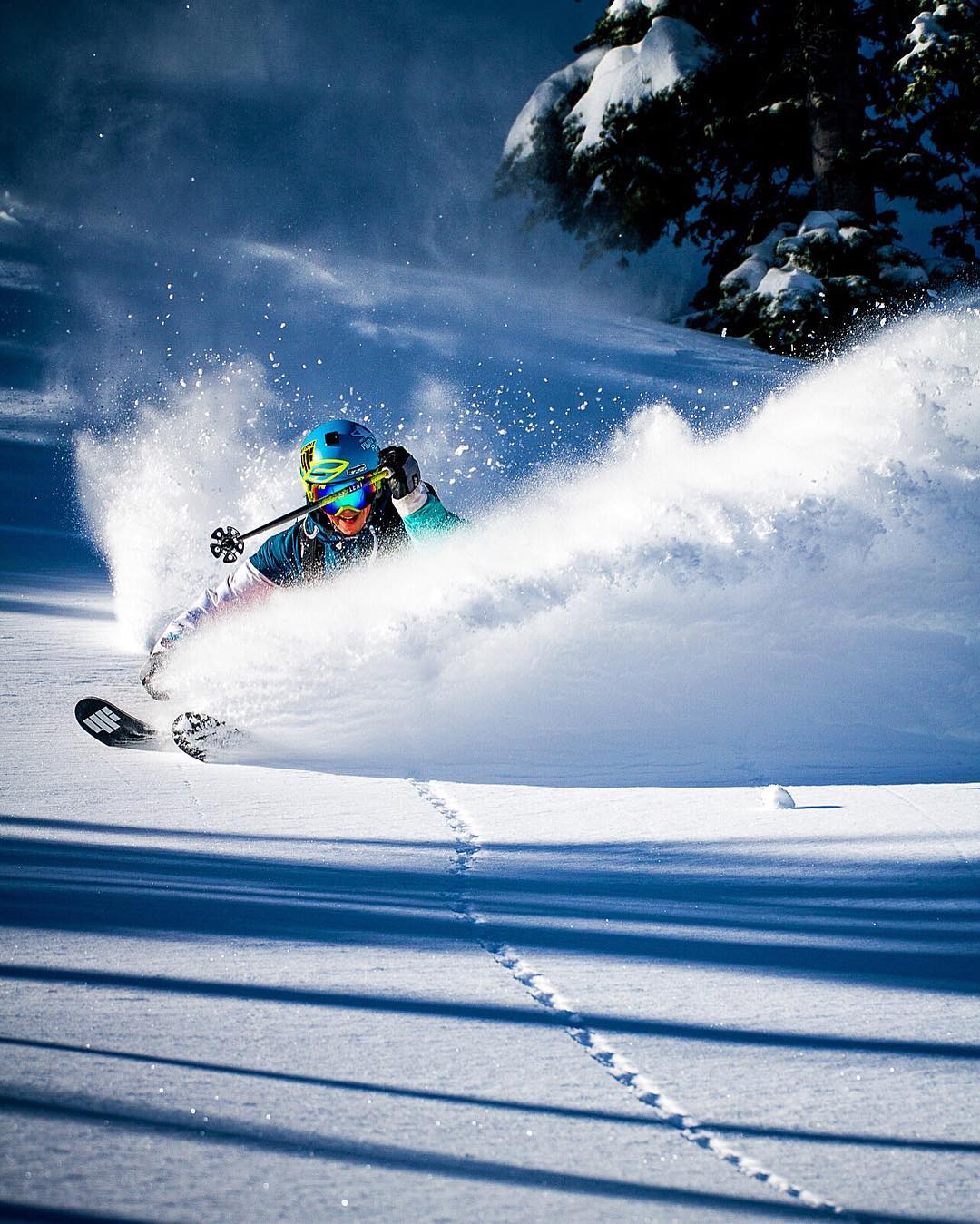 [Post 1/10] Hey friends, visitors, and prospective visitors! Local photographer Ryan Day Thompson (@ryandaythompson) here! Big Sky Resort and I are teaming up to stage our inaugural "Instagram Takeover" where I post photos I think are neat and ramble about the subject for the next few days. For instance: Powder. Yeah. We like that fluffy stuff. A couple of years ago a big front pushed in and as it started falling I could tell this was going to be a big one. I called @loganskis in a frantic rush the night before and told him to be at the ready. It dumped. We didn't have to search far and wide into deep secret stashes: This was below...Swift Current 😂😂😂 Here's to more days like this soon!! Forecast is looking mighty tasty!! #VSCO #vscocam #bigsky #bigskyresort #bozeman #montana #visitmontana #montanamoment #ski #skiing #sender #giver #powder @visitmontana 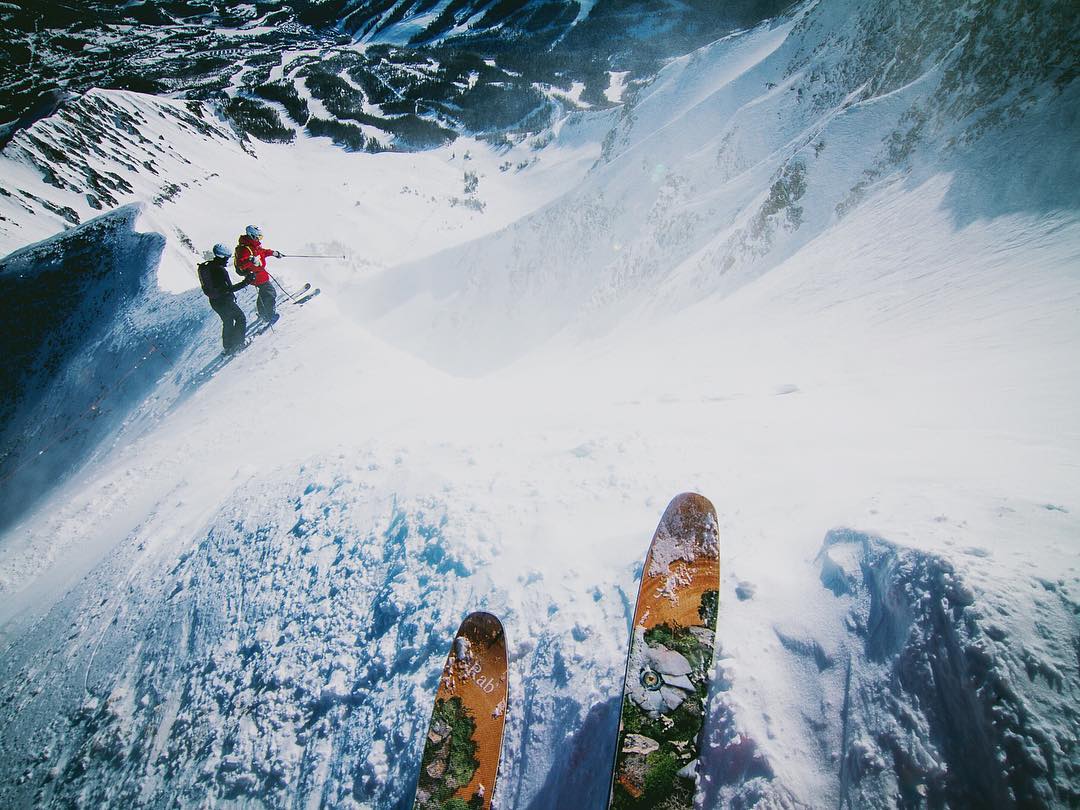 [Post 4/10] Hey, all! @ryandaythompson again. No takeover would possibly be complete without talking about one of the most classic runs in North America: The Big Couloir. "The Big" is the subject of a good many skier dreams. Accessible by two quick chairs and a tram ride locals have been known to lap it as many three to four times in a day as a matter of routine before their afternoon shift at Andiamo starts at 2pm. It attracts ski industry professionals, fierce weekenders, sweaty palmed first timers, editors of glossy magazines, the old, the young, the terrified, and the fearless. People move here just so they can ski it every day. It isn't a secret really but it feels like one because patrol spaces each party by a good ten to twenty minutes and every interested party is subject to a mandatory sign up. Translation: When you're in The Big it's just you and the mountain. Don't be fooled: This is serious terrain. Another example of our amazing patrol keeping otherwise inaccessible terrain open as a regular job. They open it as early possible in the season and it's usually one of the last runs to close in April. To ski The Big you'll need a beacon, shovel, probe (and you should know how to use them!), partner, and a whole bunch of GIVE'R!! #vsco #vscocam #bigsky #bigskyresort #bozeman #montana #visitmontana #montanamoment #ski #skiing #sender #giver #bigcouloir #couloirdreams @visitmontana 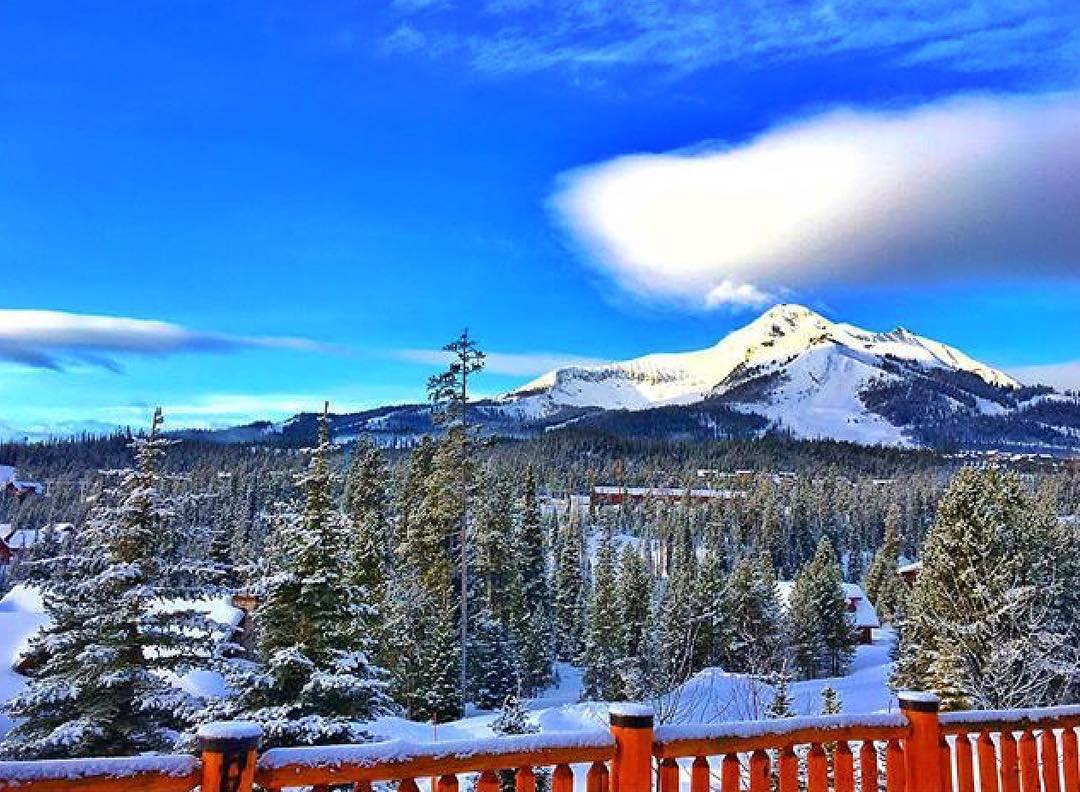 The best thing about skiing at Big Sky is its lack of crowds. Bozeman has developed a nice little airport to support the resort, but Big Sky still takes a demonstrative traveling effort to reach, unless travelers hail from airport hub cities with direct flights (Denver, Chicago, Dallas, a few others). Once skiers make it here, however, they can expect a dearth of lift lines and, if they're lucky enough, a whole day skiing powder (as opposed to just an hour or two) if it happens to dump.

The skiing at Big Sky runs from steep and harrowing to wide, easy and open. Since it opened in 1995, the Lone Peak Tram has been the best known facet of skiing here, with good reason. Unlike the trams at Jackson Hole and Snowbird, the car riding on cables at Big Sky does not scale the entirety of the resort's vertical. It picks skiers up at a point reached by the Lone Peak triple chair that's already well up the mountain. The tram carries only 15 passengers at a time up the stretch of 1,450 vertical, but because most of terrain from the top is highly technical, crowds and lines don't grow too cumbersome. The shot down Lone Peak's gut, The Big Couloir, gives expert skiers a legitimate challenge with sustained narrow and rock-walled path. It's persistently steep, with an average of 42 degrees but not so steep as to lock knees up with fear. For that kind of steepness, head from the tram to Castro's Shoulder, which averages 50 degrees.

Other steep terrain can be had off of the Challenger and Headwaters lifts, which ply the lower shoulders of Lone Peak. Getting away from the imposing peak puts skiers in wide and plentiful stretch of intermediate terrain. Big Sky's lower reaches abound with easy blue cruisers that are normally sparsely populated, and which give skiers a chance to show off their GS turning skills.

The Lewis & Clark chair, along with the Southern Comfort and Ramcharger chairs, offer some of the best terrain for kids in the West. Many Rockies' resorts are short on long, mellow cruisers that give children ample opportunities to explore the woods and shoot across the run in either direction, but Big Sky isn't one of those places. Unlike some resorts, a long green run at Big Sky doesn't translate to "a cat track that slashes across the mountain with a sheer drop on one side." Big Sky has the cruisers your kids dream about.

Big Sky recently folded in all the area that once encompassed the now-defunct Moonlight Basin Ski Resort, giving it 5,750 acres of skiable terrain in-bounds, pushing it past Vail as the largest in North America behind Whistler-Blackcomb. The Moonlight terrain doesn't bring anything too notable along with it, but it does help to even further spread out people and crowds, so skiers on snow days have even more room to powder hunt.

Also bumping up against Big Sky is a resort that's now anything but bankrupt: The Yellowstone Club. It's private, but anybody can join, provided that they buy a piece of real estate and build a house—something that, in the Yellowstone Club—averages about $9 million these days. Build a house here and you can ski with Bill Gates and the rest of the uber rich. It wasn't too long ago that we wrote a piece for Skiing Magazine needling The Yellowstone Club for its disastrous management practices that led it to declare bankruptcy. But, as the New York Times recently profiled, the resort for rich people has charged back during the last two years, selling nearly $1 billion in real estate. That doesn't mean you shouldn't try and poach the place. Just know that we didn't send you.

Big Sky's "town" equates to its base area, which has morphed into something of a town-base-capital-of-the-region combo during the last two decades. Most skiers will arrive at Big Sky after flying in from Bozeman, which is worth a night's stay in and of itself, as it's one of the better stories of town turnaround in the Mountain West.

The Summit at Big Sky anchors the lodging scene as the centerpiece of the base area. The Summit gives Big Sky a mainline ski hotel that can compete with other flagship properties across the west. Other lodging options are sprinkled throughout the base and give travelers a bevy of options, running from the seven-bedroom chalets appointed with an executive chef, to condos built in the early 1980s that best handle boozy groups of college kids on break.

This is a sleepy spot compared with traditional and bustling ski towns like Aspen and Park City. Skiers get rewarded on the slopes (with fewer people with whom to compete with for powder), but party-seekers would do best to bring their own form of entertainment to Montana. Eatery-wise, there's enough to keep diners enjoying something different every night. We like the Thai at Lotus Pad and some of the beers over at Lone Peak Brewery. One of the better burgers in the Big Sky area, now that First Place Pub has closed, is at Montana Jack, formerly Whiskey Jack's, which has great slabs of meat on buns plus 24 craft beers on tap. Those looking to take things upmarket from ground chuck to, say, an elk tenderloin should head over to Buck's T-4, which is just down the road from the resort's main village.


A few words on the Snow at Big Sky Resort


Big Sky’s snow record is average in quantity but more consistent than most Rocky Mountain areas. 11.1% of winter days with 6 inches or more of snow is near average, 17% of winter months with 30 inches or less is better than average, while 2% of months with 90 inches or more is on the low side. Snow density is similar to Utah and the Tetons. Powder skiing at Big Sky can be very good as it has similar acreage as Vail with less than ¼ as many skiers. Wind also refreshes the powder on Lone Peak’s leeward slopes

Big Sky averages about 80% open at Christmas, and is less than half open by Christmas in 10-15% of seasons. With base elevation of 7,500 feet the mellow lower half of the mountain is usually well covered by the holidays. The precipitous slopes of Lone Peak always have some exposed rocks. Experts should prefer to wait until mid-January or later to maximize skiable lines on the upper mountain. Lone Peak’s 11,166 foot altitude is by far the highest in the Northern Rockies and helps preserve the snow. The original Big Sky area had predominant sunny exposure but the recent merge with Moonlight Basin gives the combined resort 35+% north exposure. Overall late season skiing is very good most of the time.

ZRankings has tamed the price of trips to Big Sky Resort