Ikon Pass
THE
LOW
DOWN
Steamboat Key Knowledge: As a ski resort, Steamboat has terrain for everybody. Christmas Tree bowl is stuffed with good glades and hidden stashes, and wide blue groomers circle most of the mountain. Steamboat gets more regular snow than almost any other ski resort in Colorado. As a ski town, Steamboat also ranks as one of the best in CO, along with Aspen, Telluride and Crested Butte.
vs
At Steamboat, VRBO offers same properties as Airbnb, usually with better cancellation flexibility for skiers

At Steamboat VRBO has same units as Airbnb usually with better flexibility for skiers!

8.3%
*Special thanks to Tony Crocker and Bestsnow.net. 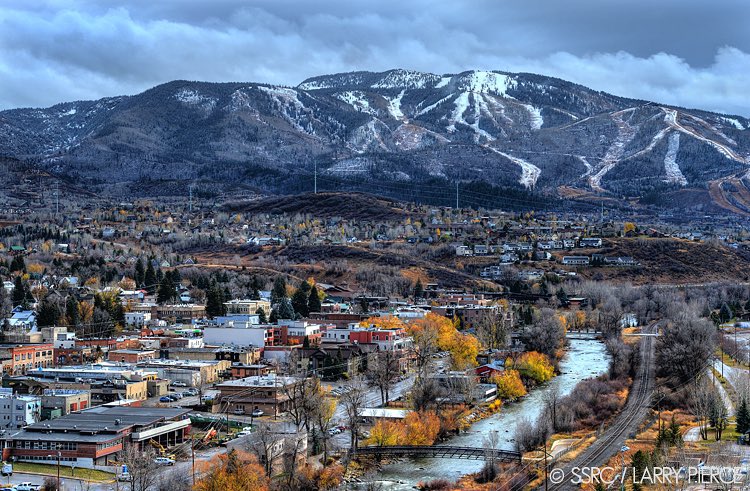 The view before the storm rolls in. Expecting snow through Friday. #SteamboatResort 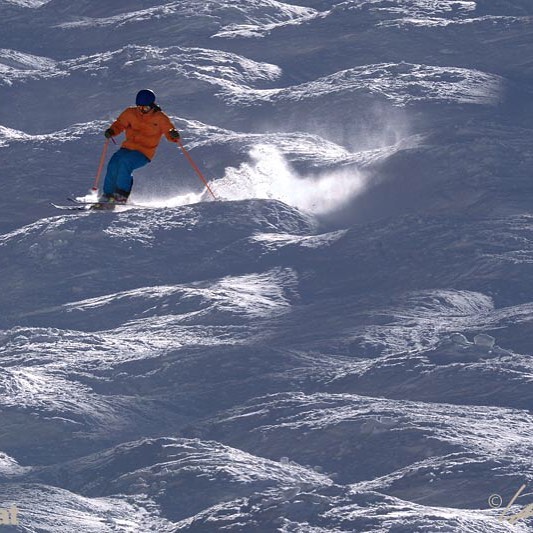 Sunshine this morning, clouds in the afternoon and snow in forecast tomorrow. #SteamboatResort 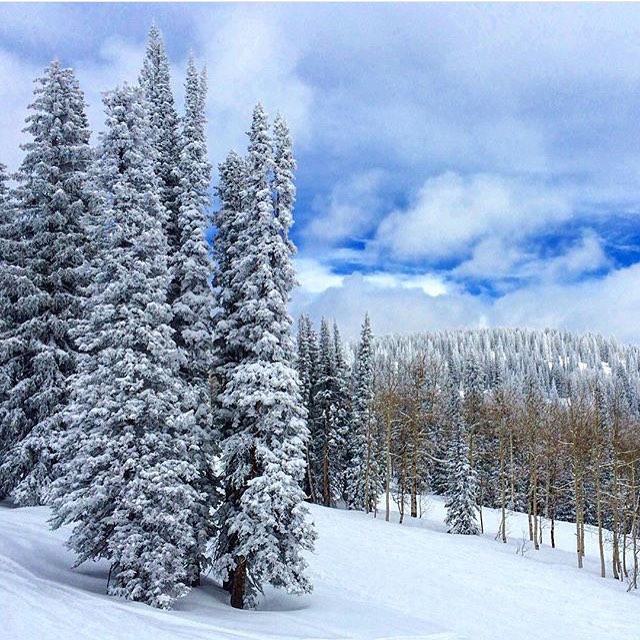 A glimpse of blue sky today and tomorrow before the next storm rolls in on Sunday. Photo by @colorado_mtn_girl #SteamboatResort 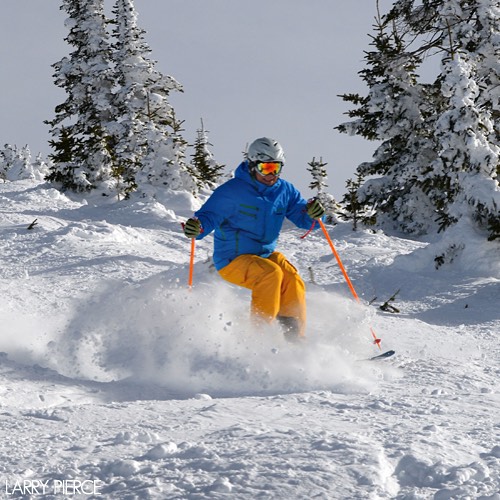 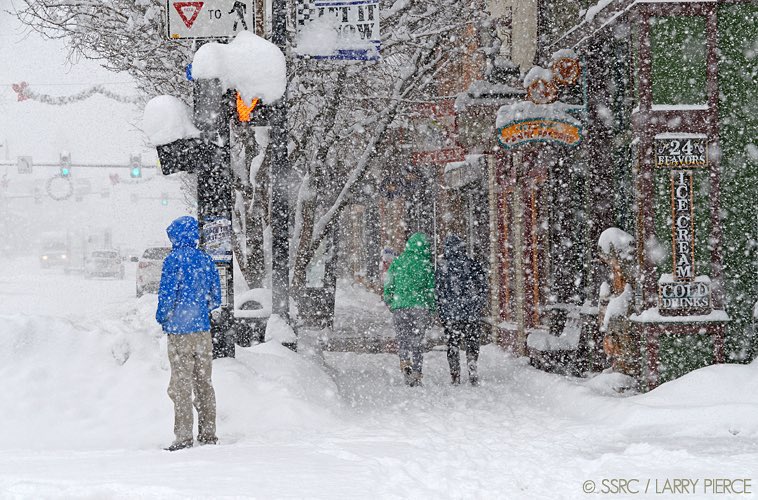 Happy first day of winter. It was dumping in Steamboat this morning. Snow should pick back up this evening. #SteamboatResort 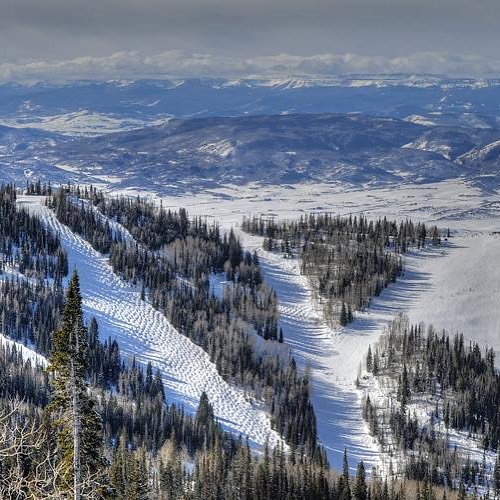 Our legs are getting tired just looking at White Out. #SteamboatResort 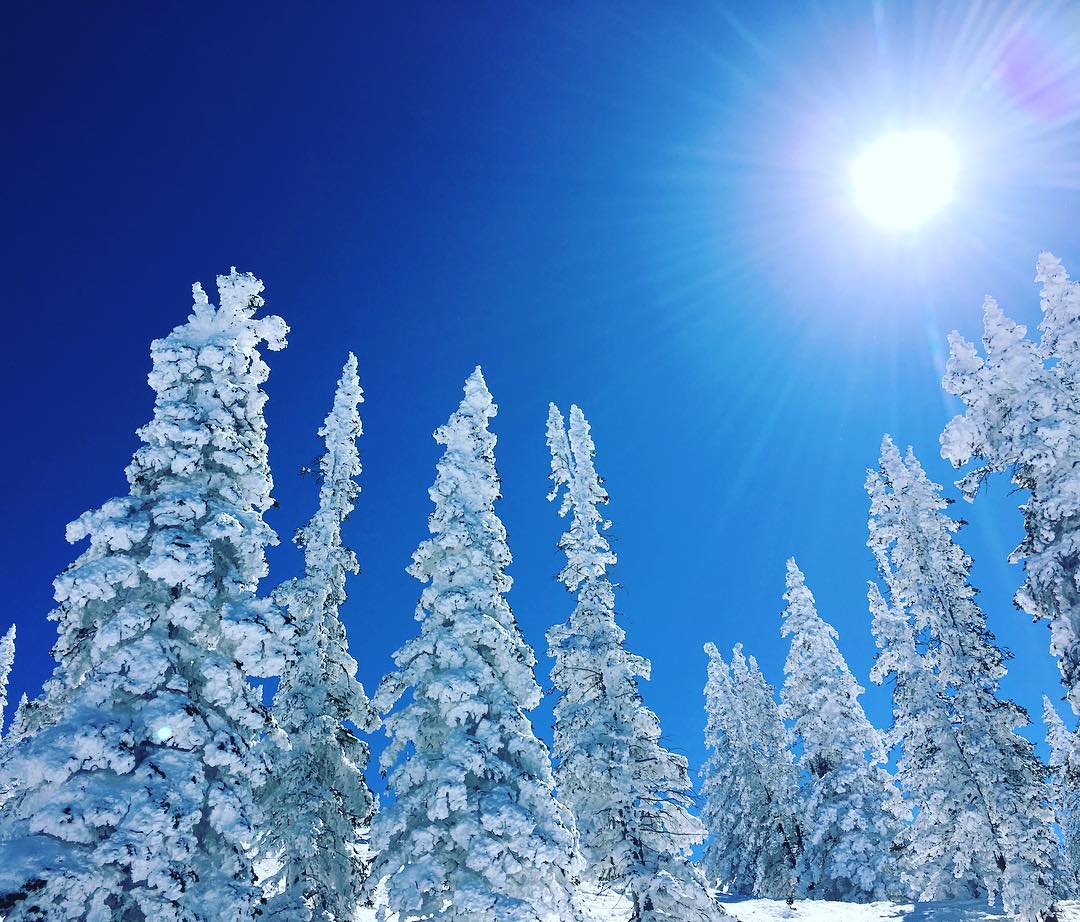 Soft snow and blue sky is the perfect way to kick off spring. #SteamboatResort 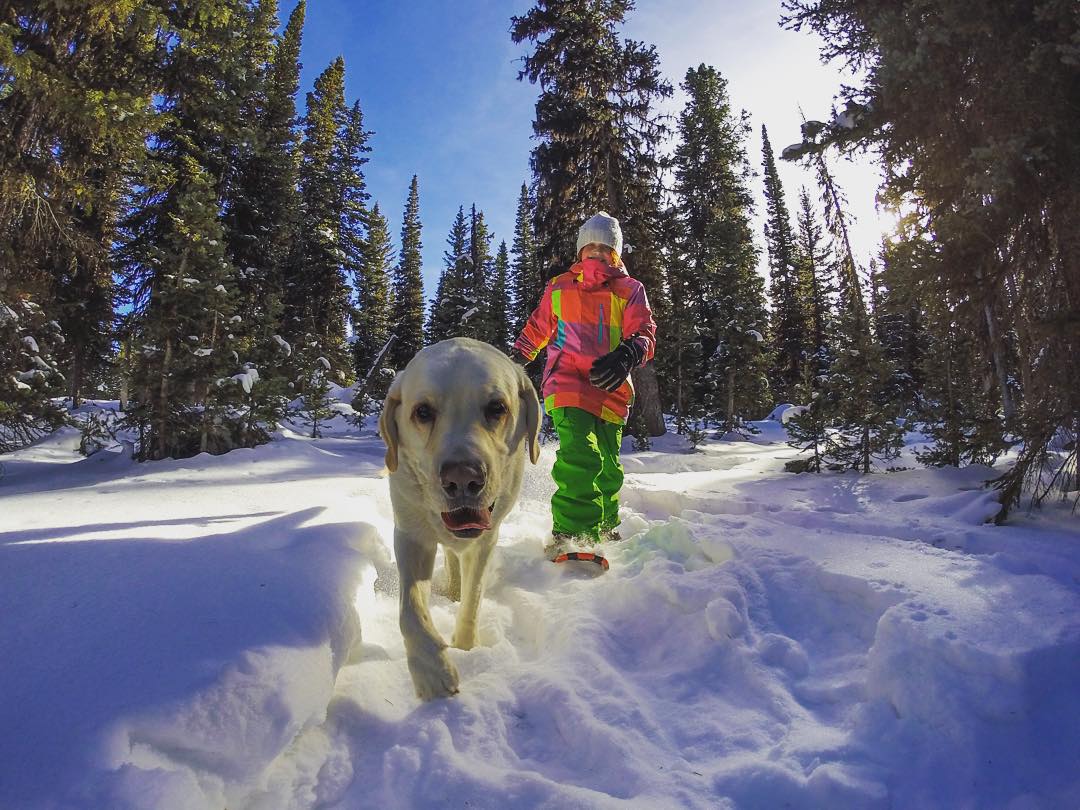 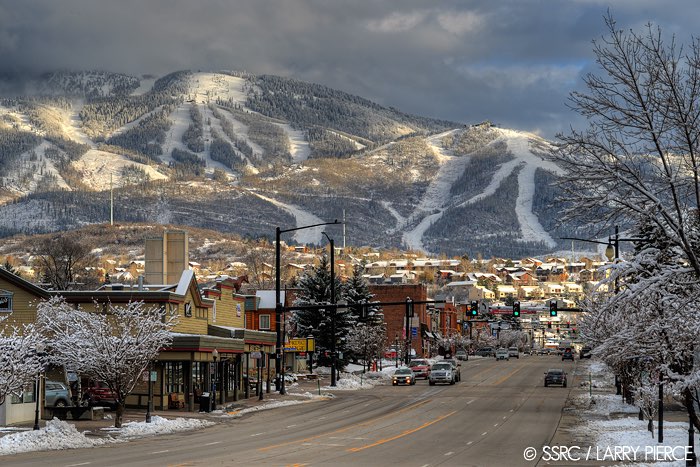 The mountain is looking pretty good for mid-November. 14 days to go. #SteamboatResort 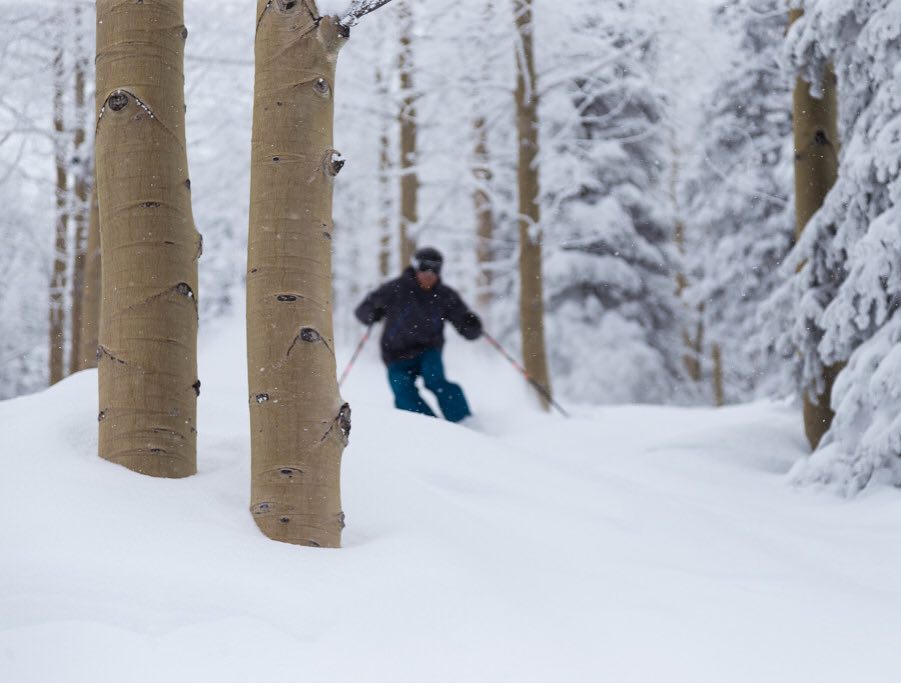 On days like these, we wish the season would never end. #SteamboatResort 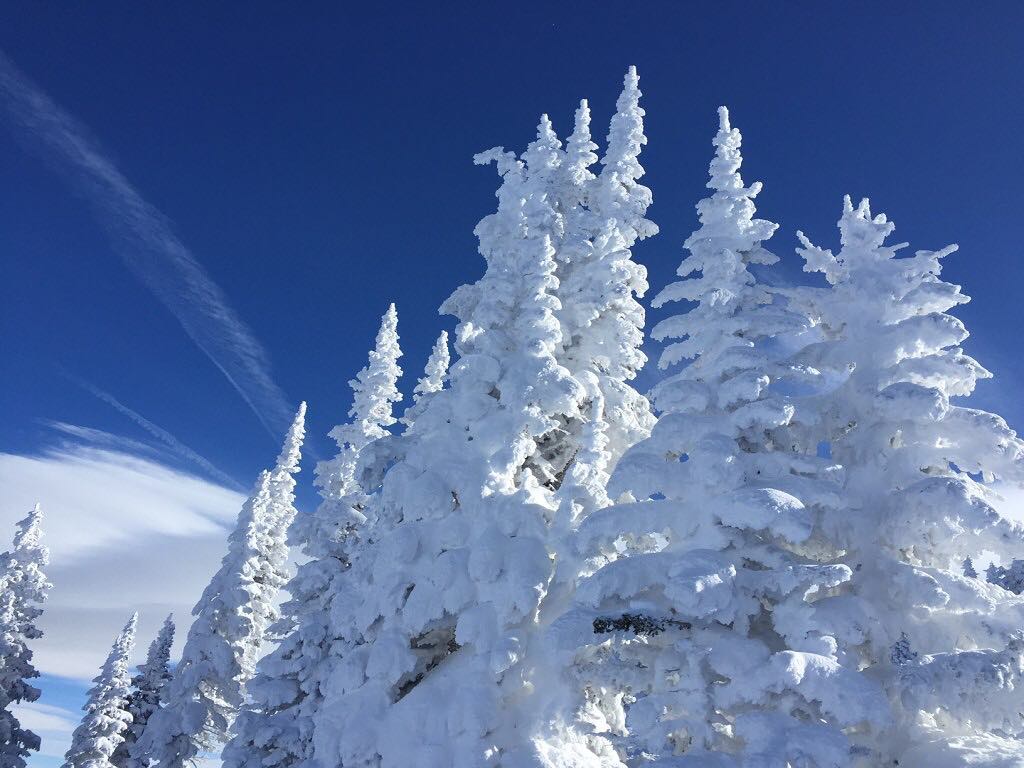 Can't get enough of those snow-caked trees and that brilliant blue sky. Photo by @kevinskisalot. #SteamboatResort 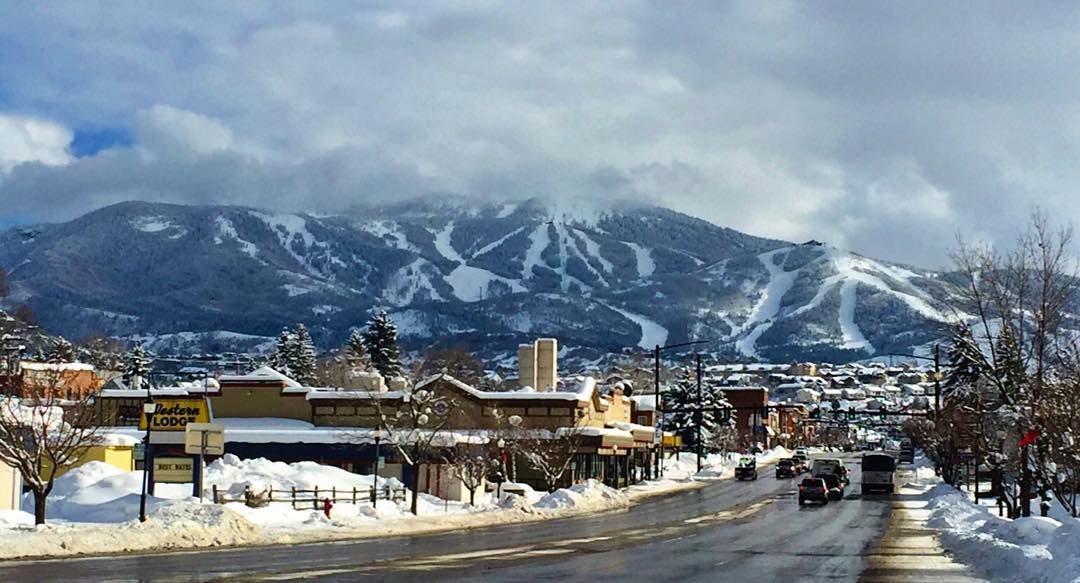 #steamboatresort is looking good after all the fresh snow.

The Skiing at Steamboat

Steamboat sits on a mound of rocks and dirt far away from any other notable ski slope. Not far to the west, Colorado's version of high desert sucks in winter storms, cools off their moisture and lines them up to be harvested by Steamboat's slopes. By Colorado standards, Steamboat's elevations are modest. The mountain tops out at 10,384 feet by lift, 10,568 feet by hike. Those are Utah or Wyoming elevations, places farther north in latitude. Steamboat still makes out okay, getting the best snow of any major destination resort inside of Colorado. That said, spring skiing at Steamboat can often be a sloppy affair, with hard, frozen snow covering much of the mountain in the morning—with corn following by noon. If any cool and chalky snow remains, it will be found high up on the mountain, in Chutes 1, 2 and 3, and within Christmas Tree Bowl.

Most skiers start their day on the gondola, the line for which can enlarge quickly on big days. It's best to get up this lift early and not return to the base area until your skiing for the day is done. From the gondola, skiers can peel in two main directions. Beginners and intermediates will want to head to looker's right, where a short run leads to Sundown Express, which opens up the far skier's left side of the mountain and a wealth of cruisers, meanderers and lollipop runs of the classic western kind: big pines, wide snow, good vistas. Skiers can milk the Sunshine Express lift for laps on this easy-going terrain. This is also a great spot for kids, with plenty of woods dipsy-doos and safe "off-piste" adventure territory.

Going to looker's left off of the gondola unlocks the side of the mountain with the real goods. Those who like to punish their spine with bumps can head straight up the Four Points chair for laps on Twister and Tornado, whose moguls are incessant. Skiing past Four Points to the Storm Peak Express will buy you a faster ride and more vertical. From the top of Storm Peak, skiers can access Steamboat's small stash of truly expert terrain in Christmas Tree Bowl and Chutes 1, 2 and 3, the latter group comprising the steepest runs on the mountain. The trees just to skier's left of Chute 1 are steep, well gladed and delectable on a powder day. Try and steer clear of Buddy's Run, the blue trail that runs just below this terrain, as it can get unruly with out-of-control gapers on busy days who ski too fast and blow up upon impact with the moguls that form throughout the day here.

Dropping off the backside of Storm Peak puts skiers into Morningside Park, a nice playground of trees and darting runs through the woods. This area gets a lot of sun, so it's best in truly cold weather or in the afternoon after snow has loosened up. The Pony Express chair, opened toward the end of the 1990s, awaits those who ski down past Storm Peak Express. This gladed area offers bumped up runs through the woods that can be a ball when the snow is soft, either from recent weather or from the sun. The entire Pony Express area is marked as black diamond terrain, but none of it is very steep, making it manageable for intermediates looking to stretch their game.

Our favorite lift on the mountain is Bar-UE, a little fixed-grip two-seater that allows skiers to lap the Chutes terrain, albeit at a slow pace. The lift is a throwback, and it doesn't get a ton of action on non-powder days—and that's why we like it. It keeps skiers above the general fray of the place, in the trees and near the top.

Steamboat Springs is one of the elite ski towns in North America. With its old main street, always alive with bustle and commerce, it rivals the West's other great ski towns: Telluride, Park City, Aspen and Crested Butte. Beyond its legitimate charisma that's been a draw for more than 50 years, Steamboat, perhaps more than any other town not inside of Wyoming, embraces the image of the Cowboy. During an early ZRankings scouting trip in 1999, one of our first, and now indelible, images of Steamboat was that of two horses tied up to the cart corrall in the supermarket parking lot.

Steamboat has been near the head of the line as a destination resort for decades, bringing in visitors from the East, Midwest and West Coasts in large numbers. Its long-time success as a port of call for tourist skiers is all the more impressive given that Steamboat stands somewhat alone in Colorado. It's not among the main cluster of resorts butressing I-70 through Colorado's center, and it's twice as far from Denver than is Winter Park, which has never capatalized on skier days the way Steamboat has. Steamboat does benefit from a good set of direct flights coming in from out of state, with daily flights from Chicago, Atlanta, Minneapolis, Houston and Dallas and weekend service from Los Angeles, San Francisco, Newark, Seattle and DC. Skiers from Texas are thick on the slopes here. Must be the cowboy thing.

With a legitimate town close to the mountain's base—although not nestled right to it—there's plenty of good food to be had in Steamboat. One of the best places to chow is Laundry Kitchen & Cocktails, with a contemporary hipsterish menu chock with fried pigs' ears and the like. Breakfast should be ingested at Creekside Cafe & Grill. The French toast is silly good. Those looking for a taste of local beer should sidle over to Mahogany Ridge Brewery for a pint and a bite.

Because Steamboat has been so developed as a desination resort for so long, the mountain is rife with ski-in, ski-out options. Lodging stretches from the base areas with big, brand-name hotels down low to dozens of condo developments going up. Little arteries of supplemental runs from these developments cris-cross their way down the sides of the hills to join the resort's main runs. A convenient shuttle service works its way to most of these spots, getting diners and drinkers to Main Street with minimal effort—and without the worry of a car. Walking back from Main Street after a night at the bars can be done, but it's not recommended by ZRankings' staff. Remain wary of anybody who claims to have made that trek, for fun, with a belly full of beer. They probably just took the shuttle and made up the whole tale of journey and woe.

For people looking for a day trip—or a nighttime excursion, the Strawberry Hot Springs may be the ticket. The springs are naturally fed, with several different pools of varying temperatures, the hottest topping off at 104 degrees. It's recuperative therapy for banged-up thighs and knees, and the setting, in the deep Colorado woods, is worth the trip.

A few words on the Snow at Steamboat Ski Resort

Steamboat has the second best snow record in Colorado to Wolf Creek. 8% of winter months with less than 30 inches snow is top tier drought resistance. 15.0% of winter days with 6 inches or more of snow and 17% of winter months with 90 inches or more are hallmarks of an area with frequent moderate snowfalls as opposed to erratic larger dumps. Snow density as in most of Colorado is as light as it gets. Steamboat is justly famous for its powder skiing with its widespread glades and abundant snow.

Steamboat's early season snow record is outstanding. It averages 69% open by mid-December, 93% open at Christmas, and is less than half open by Christmas in about 5% of seasons. Steamboat's primary exposure is west and its elevation range of 6,900 - 10,600 feet is on the low side for Colorado. Thus melt/freeze conditions are likely from mid-February onwards if it has not snowed recently.

ZRankings & Ski.com have lodging/lift packages up to 40% off for Steamboat