On the last day of March in 2015, California governor Jerry Brown hosted one of the sharper moments in what has grown into a deep, multi-year drought for his state. Brown stood in the high foothills of the Sierra and while issuing an edict for his citizens to voluntarily decrease water use by 20% across the state. He also mentioned something that should have rattled skiers: "We're standing on dry grass," he said. "We should be standing on five feet of snow."

California's troubles fall at the extreme end of what was a poor snow year for nearly the entire industry. It was the second subpar year in a row, in fact, although 2015 proved to be worse than 2014 on nearly all fronts. Conditions this winter, especially on the West Coast, were some of the worst ever seen. Resorts in the Northeast had a nice winter, but the Northeast is place skied almost exclusively by those in the Northeast. It's not home to major national destination resorts, so it's fair to leave it out of this conversation.

For the rest of the continent—the Rockies, Tahoe, the Northwest, the West Coast, and most of Canada—the skiing conditions were not only poor, they may have been the worst ever. There simply wasn't enough snow. Compounding the feeble snow totals were persistently warm temperatures, which stressed the already-below-average snowpacks.

I skied in Lake Tahoe in early February. The snow coverage at that time resembled conditions to be expected on Nov. 1. Looking out from the top of Northstar California, across to Squaw Valley, the the paucity of white on Squaw's lower slopes—just a single thin ribbon—was striking. Northstar, for its part, fared better than most because of its superior snowmaking capacity, but its best gladed terrain was still far from open. Sierra-at-Tahoe, its slopes brown and parched the entire season, closed in the middle of March, the first time it has shut down in the middle of the year's third month since the 1970s. If skiing were a past-time with an ancient history, we might have other seasons just as bad to compare with this one, but they still may have been 1,200 years ago.

Heavenly, the monster resort on the southeastern edge of Lake Tahoe, received a total of three inches of snow during the month of January. It gets worse. February and March only brought another 34 inches to Heavenly's slopes. Squaw Valley did better, but still only collected 71 inches of snow during January-February-March. Further south, Mammoth Mountain, which benefits from a base altitude that's nearly 2,000 feet above many of its Sierra peers, did just as badly. Mammoth got no snow—zero—in January with only 45 inches coming in February and March.

It's likely that California just had the worst snow year since millions of people began skiing its mountains 40 years ago. The West Coast, as a whole, in fact, had perhaps its worst winter ever. The Northwest's Cascades couldn't even coax much of their famously abundant wet snow from the clouds. Crystal Mountain, a popular area two-hours drive from Seattle, got only 55 inches of snow during the seminal period of January through March.

Perhaps most telling of all, Washington's Mt. Baker, which regularly has the the most prolific snowfall in North America, (ranked No. 1 for volume by ZRankings), got just 68 inches during January-March, with a startling total of 16 inches for February and March combined. This is a mountain that, according to ZRankings' True Snow data, averages 652 inches a year. It wasn't a whole lot better further up the coast into British Columbia, where Whistler-Blackcomb received just 106 inches of snow January through March, a dearth for them.

The winter of 2015 one of the worst ever, even with a big December in the Rockies and an April that padded snow totals: 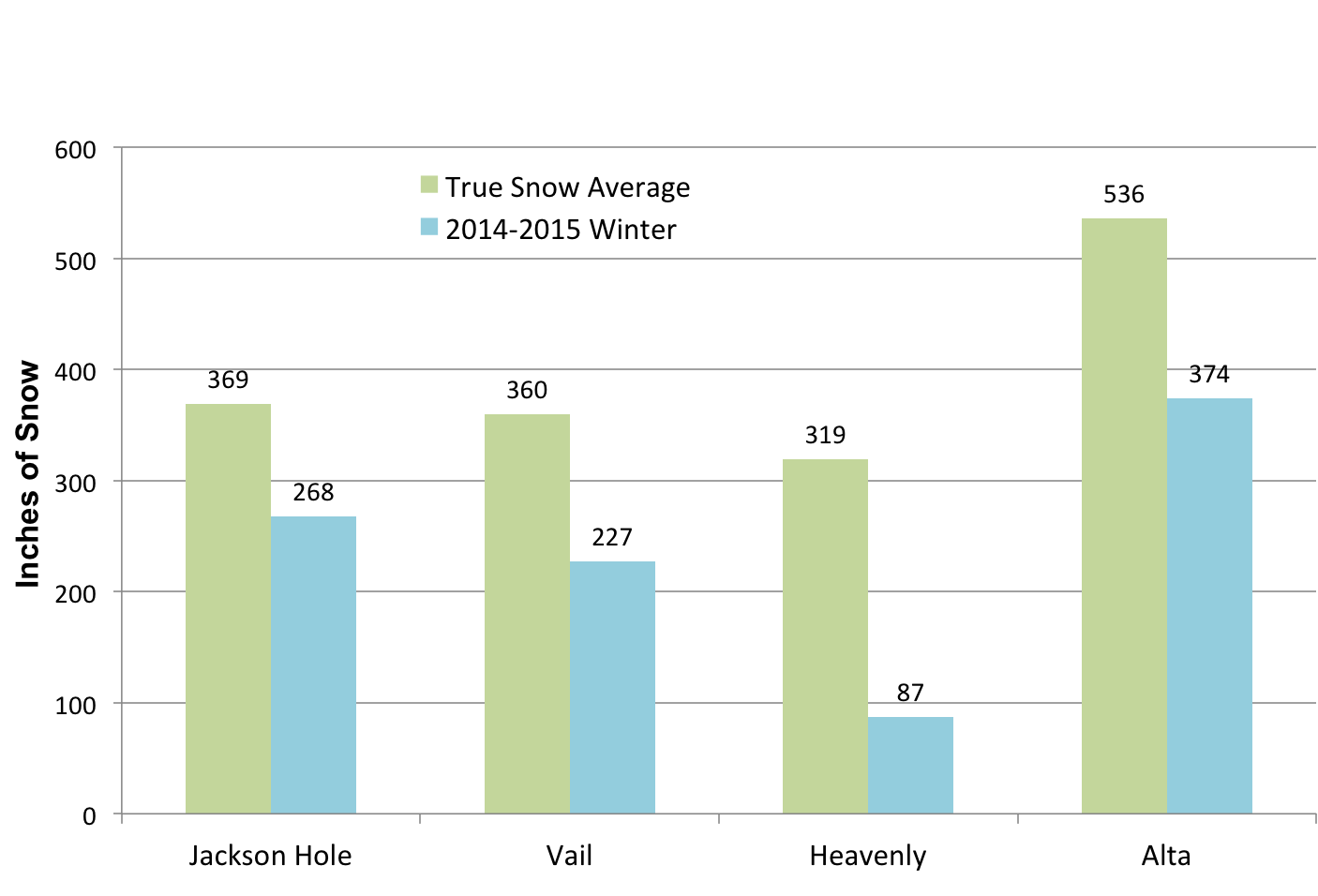 But none of this, not the warm temperatures nor the low snow totals, says Joel Gratz, founder and meteorologist at OpenSnow.com, can be declaratively linked to global climate change.

"The major influence on western snowfall this season was the persistent ridge of high pressure over the northeast Pacific Ocean, near Washington State and British Columbia," Gratz told us.

That high pressure system did create warmer water in the northern Pacific, a phenomenon that manifests every few years. You may have heard of this kind of thing. Gratz, for his part, doesn't think that the last two seasons of subpar snowfall and weather are the new normal.

That's good news especially to those in Northern California who have suffered through two golfing winters.

In the Rockies, things were better, but hardly good. The inner mountains of the North American continent are not as prone to the wild fluctuations of snow abundance and drought that can affect the West Coast mountains. Tahoe can often receive more snow during an entire winter than the average Colorado resort, but Sierra resorts have much larger standard deviations for snowfall, which means 20-inch months are just as likely as 200-inch months. The Rockies and inner ranges of Montana, Wyoming and Utah are steadier, but they experienced a paltry year as well.

Vail received only 106 inches of snow during January through March while Aspen got 110 inches and Telluride only 92 inches. Counting early November, December and early April, Vail got 227", which is still only 63% of its True Snow average of 360 inches. Other totals around Colorado were similar, percentage wise.

The Salt Lake side of the Wasatch in Utah, with its smaller standard deviations and its terrain and geography advantages for capturing snow from otherwise benign weather systems, often holds the line better in thin years than anywhere else. That wasn't the case this year. Alta, ZRankings' No. 1 ranked resort for snow, had a glaringly poor year, receiving only 107 inches of snow in January-March. For the season, November through April, Alta only received 278 inches total, only half of its True Snow average of 536 inches. And that's including 42 inches of snow that fell rather late in April, after most people, save a few hardy locals, put their skis in storage.

Further north, in Wyoming, Jackson Hole outperformed the rest of the pack, something of a trend during this last decade or so, with 193 inches of snow from January-March, giving the resort a total of 316 inches for the season. At mid-mountain, however, Jackson totaled 268 inches, which is 28% below its True Snow mid-mountain average of 369 inches—a better result than nearly everywhere else, but still well below normal. Compounding that fact, Jackson was unseasonably warm almost the entire winter outside of a spate in early January, which kept the snowpack from ever reaching a level that seemed quite adequate. This was an issue that bedeviled the entire West.

The entire winter was warm, but February was grossly out of line not only in Tahoe, but the rest of the West, too. After a weak January, this was the season's death blow, as February is the great equalizer of ski season months. Bad starts to the season can still be righted here; a big February can fix many weather sins from December and January. Or conversely, a bad February can also dull the buzz of a season that started prolifically.

We received exactly the February we didn't need: 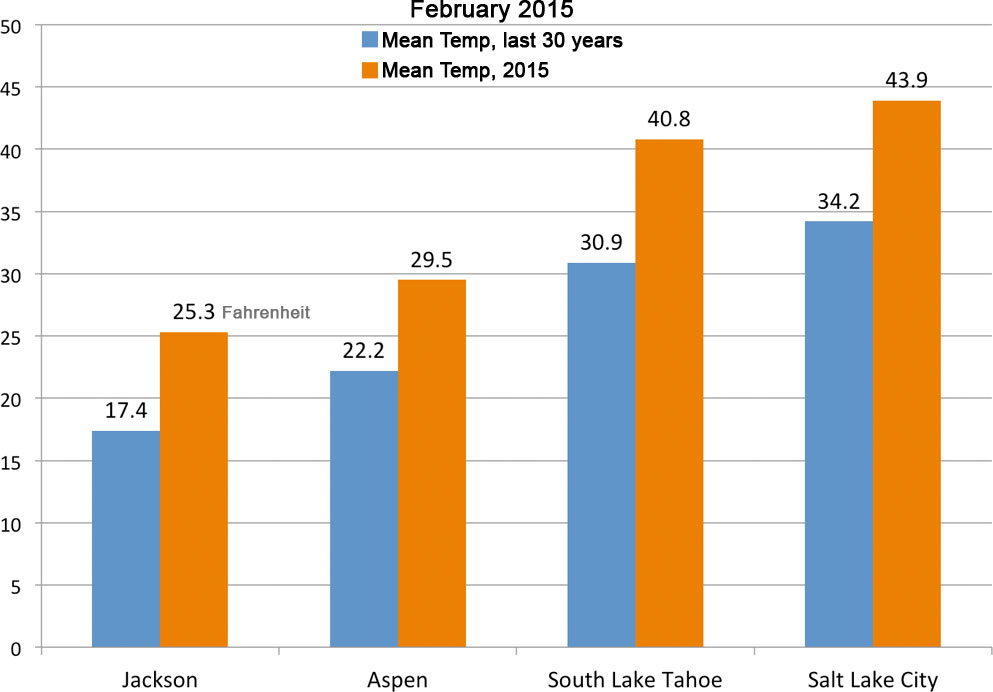 Jackson's mean temperature for February was 25.3 degrees, a 7.9-degree leap from the normal mean. Aspen was 7.3 degrees high at 29.5, and Salt Lake City was nearly 10 degrees above normal for the month with a mean of 43.9 degrees. These high mean temperatures may not sound so warm, but consider that these are the average temperatures entire months, all hours included. Aspen's abnormally high mean of 29.5 degrees meant its average daily high temperature for February was 41.8 degrees. It's hard for snow to remain cold and unmelted at 42 degrees. In March, when ZRankings visited Aspen, the average high was 51.7 degrees, more than 8 degrees above the normal high of 43. Luckily for us, Aspen's slopes preserve snow well at Ajax and Highlands, where we did the bulk of our skiing. But the lower slopes everywhere suffered.

March, unfortunately, was nearly as hot as February, when compared with normal averages. Couple that with another weak month for snow across the west and most lower-elevation snowpacks were stained with mud by the third week in March.

Taken alone, the low precipitation numbers would have made 2015 merely a bad winter. Combined with sometimes-record heat across the West, however, made it likely the worst winter the West has seen.