The beginning of a ski trip brims with so much goodwill that the initial day of travel never quite feels like the slog that it is. The trip home acquires a completely different vibe, a less enjoyable one. Getting to and returning from ski destinations can involve several legs, some flying, some driving, all schlepping. Much of this travel pain can be avoided by flying directly into ski town airports that require little commute to the slopes and, often, allow skiers dispense with a car altogether. When utilizing ski town airports, even that first day of a trip can be converted to a ski day.

All things being equal, most people would do exactly this—fly direct into ski towns. But those flights can be expensive, when compared with a flight to, say, Denver International Airport. A flight from the East Coast or Midwest directly into Aspen might cost $600, whereas a flight to Denver might be $350 or $400. On a four-person trip, that's nearly $1,000. The tradeoff people make on that is understandable.

That said, we're here to determine the best airline among the big three (American, Delta, United) for flying directly to those ski town airports, where the slopes are close at hand. The best airline for any individual person, of course, depends on many things. Foremost among them, where a person lives. For anybody living in a hub city of a major airline, the choice is obvious. A skier living in Houston is best off flying United and a skier in Dallas should fly American.

The question is a valid one for skiers who don't live in one of the major hub airport cities that have some semblance of ski service. The major hub cities with at least some ski service:

There are other hubs, of course, such as Miami for American or Detroit for Delta, but they don't have any or enough ski town service to make a difference. And we're skipping the two big airport hubs in ski country, Denver for United and Salt Lake City for Delta, because people there, by and large, don't fly to go skiing. But if they did, their choices would be academic.

I examined all the regular, all-winter-long flights of the big three, plus Alaska Airlines, into nine true ski resort airports, again skipping Denver and Salt Lake City, as service to those airports is dominated by United and Delta, respectively. Why Alaska? When we examined all of the ski airport schedules, we were surprised to see Alaska with a nice little catalogue of daily and weekly ski town flights from not only its Seattle hub, but also Los Angeles, Las Vegas and San Diego.

The nine ski resort airports I looked at: 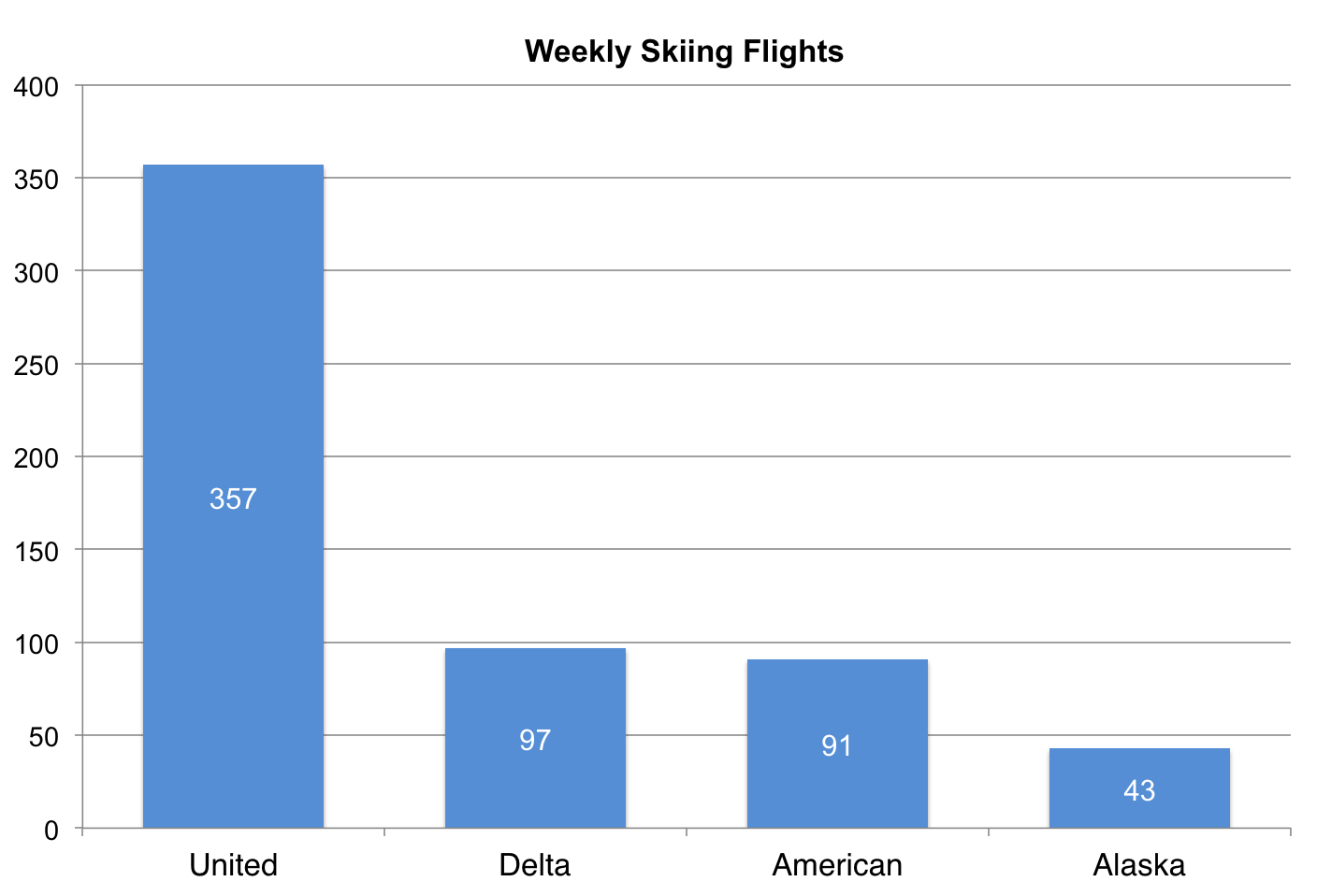 The above flights-per-week numbers include all of United's ski town flights from Denver. So, for instance, Denver to Aspen or Denver to Montrose/Telluride. Just by nature of having the Denver hub, United dominates flights within Colorado, so it has a natural advantage there. But those flights remain relevant to just about anybody, as most of the people on those planes have flown into Denver from somewhere else. United uses DIA as a big skier clearinghouse where people arrive from all over the country, and even Europe, for connecting flights to more than half a dozen ski destinations.

But even if we remove the Denver flights from the weekly total for United—191 of them—the airline still has 196 flights per week into ski destinations, more than double second place Delta's total of 97. United owns impressive numbers of ski flights per week out of several airports other than Denver:

United has simply made it a mission to own this corner of commercial aviation. Skiers who live anywhere other than Dallas, Minneapolis or Atlanta are likely going to fly United on their next ski trip. That gives the airline pricing power into destinations like Aspen, Montrose/Telluride and Jackson Hole. As any skier knows, those flights usually aren't cheap.

Other airlines have noted United's dominance here and its apparent profit. Delta has taken the interesting step of adding ski flights from non-hub airports, such as Los Angeles and Seattle. Alaska, for its part, has sniffed out the market and added 17 ski flights per week out of Seattle and another 24 out of Los Angeles. Even American has made Los Angeles a priority, with 14 weekly ski flights from LAX. American also has seven flights a week into Eagle Vail from both JFK and Miami, which keeps customers in those markets from riding United through Chicago or Denver.

Even with that, United's lead at the moment remains quite safe. That's something to consider for skiers who are able to accumulate miles and other airline perks while flying on business or on other vacations. When it comes time to cash in, United gets skiers to more resorts than any other airline.